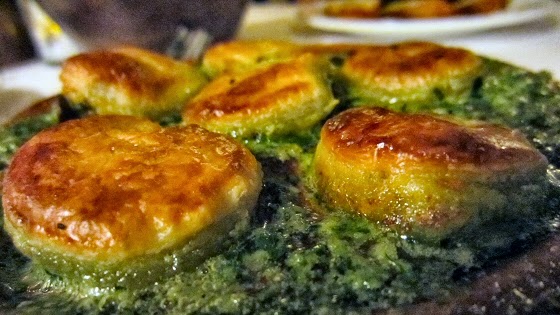 (San Francisco, CA) — Our latest Californian adventure is drawing to a close. We’ve driven from Los Angeles as far north as Santa Rosa, hitting some of our favorite haunts and finding new places we’d like to frequent again. Now, back in San Francisco, we need one last dinner to put in the scrapbooks. Mere blocks from our hotel is Cafe Claude and we’re both in the mood for French food...

It is a warm evening, too muggy to sit outside, even though we see many diners occupying the tables set in the alley behind Cafe Claude. I am hoping for air conditioning inside and a view of the jazz trio that’s playing tonight.

We make our way to the host stand, where a young lady leads us to a table near the rear of the restaurant. It’s cloistered close to nearby diners and I don’t like that, but once I’m settled it’s not too distracting. Also, nobody has seen fit to turn on the air conditioner so already I’m sweating as I peruse the menu. It’s all traditional French fare, exactly what I’d hoped for.

After sparkling water is poured and our body temperatures dropped slightly, we chill out with tall glasses of Ruelle-Pertois champagne. The bubbly is dry yet creamy, with that telltale sweet-tart aftertaste. And what better to go with sparkling wine than snails? I’d half-hoped they would be like those at the Paris Club in Chicago, but no such luck. These are very traditional, baked in dish with garlic butter, parsley, pernod, shallots, anchovy, and topped with a puff pastry. They’re good, though a little more chewy than I like. In the end, I can only tuck away 5 of the 6 escargot. I try a bite of Juliet’s brandade. Too fishy for my taste.

In my opinion, no French menu is complete unless it includes Coq au vin and Cafe Claude does not disappoint. (Sadly, there is no cassoulet except Tuesdays.) I order a glass of the silky smooth 2005 Reignac merlot/cab blend from Bordeaux to go with my bird, on advice from our waiter. It’s a perfect match to the crock of slow-cooked chicken marinated in red wine, bacon, mushrooms, pearl onions, fingerling potatoes, and roasted carrots. The carrots are super-sweet, nearly caramelized. Meat flakes off the bones, tender and succulent. Heck, even the mushrooms are pretty good! I use some crusty bread to sop up the remaining broth.

By the time we’re elbow-deep in dinner, I’ve nearly forgotten about our nearby fellow diners...until one of them departs, leaving his shopping bag behind. I signal our waiter who holds the bag at the host stand until the diner returns to claim it. It’s my one contribution to civility on this trip. I’m surprised I don’t earn a Nobel Peace Prize for it.

As we sip the dregs of our wine and listen to the jazz musicians finish their set at one of the bar—right about the time someone gets a clue and activates the air conditioner—I’m happy we made time for Cafe Claude. The food was as stolidly traditional as expected and the ambiance felt authentically French. Next time, I would rather sit at the bar to enjoy some absinthe and more jazz.

Tonight’s our last night in San Francisco and Jeremy’s picked a French bistro that features a jazz trio. To say I’m excited about this one is an understatement. We walk just a few short blocks from our hotel a little before 7pm but the streets are surprisingly empty, which lends a slightly eerie vibe to our stroll. The cafe is tucked down a small alley.

The jazz trio is in the corner opposite the host stand. We are seated immediately at a cozy table right between two other two-tops. One of the tables has two businessmen conversing in French with only an occasional smattering of English thrown in. I take it as a sign that if two French-speaking people are dining here, the place serves up decent French fare. I realize this isn’t quite logical, but it comforts me nonetheless.

Our waiter is friendly and runs through the menu with us. I’ve already peeked online and decided what I want to order: French onion soup and roast chicken, two of my favorites. But as he points out certain house specialities, I decide to change my plan. I can get French onion soup almost anywhere back home, but Brandade du Morue? Nope, nobody back home serves baked salt cod potato souffle. I remember seeing this dish on nearly every Parisian menu when we visited a few years ago, but I never tried it because I was intimidated by the combination of fish and potatoes. Which seems ridiculous for someone who used to eat fish and chips on a regular basis, right?

The souffle arrives piping hot and I have to wait several minutes before I can dig in, though I find myself picking at the crispy top layer. There are baguette toasts to schmear the souffle on and once it’s cooled off I do. Turns out to be the most decadent luscious potato puree I’ve ever had, heavily seasoned with olive oil and flecked with flakey white cod. It’s like fortified mashed potatoes...creamy, rich, and comforting. I love it! And the glass of French bubbles I’m sipping compliments the dish perfectly.

Instead of roast chicken, I opt for their version of steak frites, Faux Filet. When I tell him I like a big bold red wine, our waiter recommends a California cab to go with the steak. I appreciate he’s confident enough to not recommend a French red. The steak arrives in a gorgeous puddle of bordelaise, with a slab of bone marrow herb butter perched on top and a giant pile of frites. I try a few different combos, a bite of steak daubed in the bordelaise with a bite of frite, steak dipped in the marrow butter, then a few frites dipped in the butter. It’s all heavenly.

The food, service, and atmosphere at Cafe Claude make for an amazing last night in San Fran!