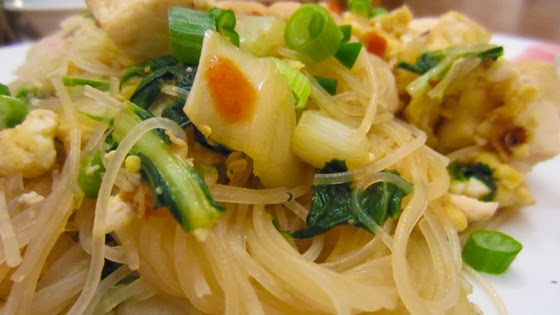 Every once in a great while, we get tired of ingesting restaurant food, no matter how haute cuisine it may be. This too-long winter all but encourages us to stay home and prepare dinner. Both of us really like Thai food, so Juliet pores over different cookbooks and magazines until she’s found an enticing recipe from Food & Wine for Mai Pham’s Pad See Yew. With a few SheFed tweaks, street food hits the table at our household...

Next, cook 2 lb bok choy (stem and leaves roughly chopped into 2” pieces) in a large stockpot of boiling water for just under two minutes. Transfer to a colander using a slotted spoon or spider (you’ll be reusing the water). Add 2/3 lb dried rice stick noodles to the same boiling water and cook until just pliable (less than 5 minutes). Drain the noodles and rinse under cold water, shaking off excess. Put noodles in a bowl with 1 tbsp grapeseed oil and toss.

In a large skillet, heat 1 tbsp grapeseed oil until it shimmers. Add 1 pkg extra firm tofu (cubed) to the skillet. Let a golden crust form on all sides. (If the tofu isn’t really dry and pressed well, it will crumble up a bit during this step. No worries...it will taste the same.) Now transfer the tofu to the colander with the bok choy and add 1 tbsp grapeseed oil to the pan. Once oil is hot, add 3 lg eggs (beaten well) and cook until just set. Add noodles and toss to combine. Add sauce and let reduce for 5 minutes. Add tofu and bok choy, mixing all to combine.

Pile it all on a platter and serve with minced, seeded jalapenos; crushed, salted peanuts; scallions (green and white parts sliced thin); sriracha; and lime wedges. Get ready to slurp!

Although I love Thai food, I’m pretty mystified at how depth of flavor is achieved. I don’t consider myself a cook, though I do like to dabble in a few things (chili, omelettes, pizza) so I’m content to watch Juliet do her thing, lending a hand here and there when I’m asked, and taking pictures. The smell of sweet, salty sauces fills the house, making my mouth water.

All the ingredients come together in a series of choreographed maneuvers; the pots and pans dance upon the cooktop while my wife conducts the colander. Tofu tumbles onto a bed of noodles. Before you know it, it’s time to eat.

I’ve never had Pad See Yew so am not sure what to expect. The flavors are much more subtle than you’d expect. It’s no Pad Thai. Even with a few dashes of sriracha, it only seems barely alive. It’s more comforting than exciting, without any of that sweet-spicy I had been promised by the scent while cooking. It does seem a stroke of genius to pair tofu with egg, though; the textures play well together. I can tell Juliet isn’t overly impressed, but I know it will only improve with time.

A couple days later, when she’s in Vegas, I take leftovers for lunch. As I’d hoped, the flavors have had time to meld and deepen. It’s a much better dish than the first night, and doesn’t even need hot sauce to entice my taste buds. I eat it all up. The original recipe called for meat of some kind, but I think tofu is a great (and preferable) substitute. Still, I would be curious to try with shrimp sometime.

I’ve been on a Thai kick lately, but instead of the rich curries I usually crave, I’ve been making lots of noodle bowls. Sloppy slurpy noodles laden with fresh veggies, in stark contrast to my typical winter predilection for braised meats, mashed potatoes, and cheesy pastas. Having never met a bowl of pad Thai I didn’t love, when I stumble upon a recipe for Pad See Yew (which seems similar) I vow to make it. The recipe is straight-forward enough and I’ve never cooked with rice noodles before. All the ingredients are available at my local market so I find myself making Pad See Yew on a Saturday night.

I tend to get flustered when making stir-fries and noodle bowls, so I make sure I have all the ingredients gathered. The recipe is incredibly easy and in less than 30 minutes I’m carrying a platter of noodles and veg to the table.

Despite doubling the sauce recipe, the dish is somewhat bland on first bite and I find myself adding more condiments. Extra lime juice and peppers give it a big boost. The tofu is slightly crispy on the outside and warm and creamy inside. The scrambled eggs give the dish some added richness. The bok choy is slightly overcooked from being piled into a narrow colander; next time I’ll scatter it on a clean dish towel to prevent carry-over cooking.

Not a terrible first effort and I’m already planning a few changes to the next batch. I’m thinking of adding mushrooms and sprinkling on some bean sprouts for more crunch.