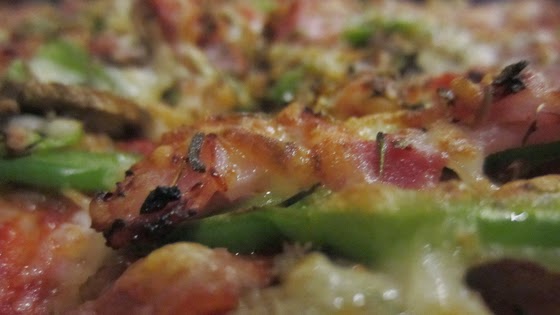 (Saint Joseph, MI) — After a long weekend of birthday debauchery in Chicago, we’re both looking forward to getting home and settling in to normal life again. Our train is due to arrive back in West Michigan right around dinner time. So, where to eat? Luckily the train station in Saint Joseph is also home to a local favorite: Silver Beach Pizza...

Even bad pizza is good pizza. So the saying goes, and I’m as guilty as the next guy of settling for bad when I’m in the mood for pizza. It’s one of those dishes that almost always satisfies, even when you know the dough and toppings are cheap. Thankfully, I know Silver Beach Pizza is one of the good ones. Juliet has brought home a cardboard box or two, and while I’ve enjoyed the meal, it hasn’t been particularly memorable. Until tonight, I’ve never visited the restaurant proper; I’m hoping for fresh pizza to make an impression.

We hop off the train and stow our luggage in the Prius (parked in the lot over the weekend). Then we head inside, where it’s warm and not too busy for a Sunday night. We’re shown a comfy booth and given menus. Soon, our young waiter appears to take our drink orders. Admittedly, as I’m wont to do, I hold his feet to the fire when he trips up on the beer offerings. Good thing I do; Instead of the familiar Michigan draughts, I manage to pry vital information out of him through careful questioning. It’s not on the menu, but they have Stone Brewing Company Matt’s Burning Rosids on tap!!! It’s an imperial cherrywood smoked saison that is complex, sweet and malty.

And what better to go with such a high-octane beer than some Frickles? It might have a fancy name for an appetizer, but it’s just deep fried pickles. Or so we assume. They never arrive, thanks to our less than attentive waiter (who has already proved his ineptitude with lackluster beer knowledge). Despite his offering to rush an order later, we decline and opt to try them another time.

Thinking of leftovers already, we agree to order two pizzas. Juliet does not hesitate to hone in on The Carousel and I choose The Hawaiian. Some folks don’t like pineapple on pizza, but I’m just as adventuresome about food as I am about beer. Secretly, I’m patting myself on the back for picking the best pie. How can a pizza named after a merry-go-round trump Canadian bacon? Easily, as it turns out.

My Hawaiian is pretty good, but not quite the salty-sweet combo I’d craved. The toppings haven’t melded very much and the cheese slides off too easily. The Carousel, however, is phenomenal. Pepperoni, sausage, ham, bell peppers and mushrooms seem like common toppings but the interplay works some kind of miracle. Heck, I even enjoy the thin, freshly-baked crust (ordinarily, I prefer thick dough). Shamefaced, I eat more of her pizza than mine.

By the time we’re through, there’s less Carousel than Hawaiian, yet plenty to take home for lunches. We make a mental note to avoid our waiter next time and carry our cardboard box out into the night. It’s good to be home, with full bellies and smoked cherrywood on our tongues.

Having worked in St. Joseph for nearly seven years, I’ve had more than my fair share of Silver Beach Pizza. Even though we moved here seven months ago, Jeremy and I haven’t made time to get there. Something about five months of ice storms, white outs, and record snowfall kept us from venturing down to the beach. But tonight our train from Chicago stops at the Amtrak station which is conveniently co-located with SBP and we decide to grab dinner before heading home.

There’s a bit of confusion at the host stand as the student employees try to figure out where to seat us. After a bit of turmoil, we’re led to a booth and our waiter shows up almost immediately. He’s cute as a button and easily up-sells us from a 12 ounce pour to schooners of beer. We order the Frickles, fried pickles, to share while we decide which pizza to choose. Later we discover our server forgot to enter the Frickle order. In the end it’s a good thing as we decide to share two smaller pizzas instead of one big one. As usual, our eyes are bigger than our stomachs.

If you read this blog regularly, you know I’m a creature of habit continually gravitating to simple comfort foods, familiar tastes and textures, and my favorite stand-bys. I have to admit, every time I’ve been to Silver Beach Pizza I have The Carousel with pepperoni, sausage, ham, green bell pepper and mushrooms. I’m usually not a fan of green peppers—they’re too acrid for me. But I like them on this particular pizza.

My other new fave at Silver Beach is to ask for extra sauce. It’s a trick I learned from Santi, a new but dear Chicago/Paw Paw Lake pal who knows his pizza! Their sauce isn’t overly wet or runny, but very thick and incredibly savory, packed with herbs. When you order extra sauce the server will ask if you want it on the crust with the first layer of sauce or on all the toppings, which leads me to believe there’s a gaggle of fans who request this regularly.

In addition to The Carousel, we order The Hawaiian with Canadian bacon, pineapple, and white onions. Without extra sauce because Jeremy’s more than a little skeptical the additional sauce will make the pizza floppy and wet.

We’re on our second schooner when the pizzas arrive and both pies are divine. Finally I’m trying something other than The Carousel, which is fabulous for the record, and Jeremy’s a convert to the extra sauce option.

Since this initial dining in experience at Silver Beach Pizza, I’ve grabbed a few take-out pizzas on the way home from the office and I think it’s the best pizza in town. The Sicilian with sausage, salami, pepperoni, green olives, and basil is a new favorite. Stop by in the summer to enjoy a view of the beach, an icy schooner and a fabulous pie...with extra sauce of course.