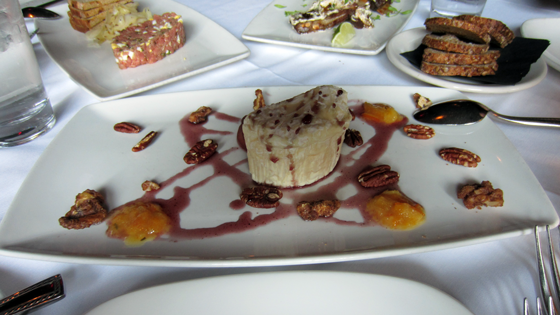 (Detroit, MI) — We are winging our way to Rhode Island tomorrow and flying out of Detroit. As luck would have it, our brother lives out that way. Is he free for dinner? Miraculously, with his busy schedule, yes! Some sage advice from our friend Vandy points us in the general direction of Michael Symon’s Roast, located downtown. After dodging some rush hour traffic, we arrive and valet park before heading inside...

I’m probably overly-excited because we’re being joined by my brother, and these days we so seldom get the opportunity to hang out, since we’re each living on opposite sides of the state. Additionally, I’ve heard good things about Roast and can’t wait to try the cuisine. There’s some kind of traffic snarl (later, we learn there was a relatively minor fender bender), but we manage to squeak through. My bro has already arrived, so we head in.

Despite being a few minutes early, our table is ready. The hostess leads us to a spacious booth in the lounge area. We are none too picky, though I am curious why they seat us in the bar area when the dining room isn’t exactly to capacity. It’s cool, just weird. I’m always wondering what rules are at play at any given restaurant. The lounge is very nice, with quality construction, a mixture of dark wood, leather, stainless steel, and glass lending some class. It does feel a bit like a spacious hotel bar, though.

Our server is friendly, yet firm, and you can tell she’s very analytical about pleasing us but also keeping to a timeline. We start off with drinks; I am happy to see MMMKay, an Indian pale lager from Short’s Brewing, on draught. The starters section of the menu is chock full of good stuff, from Crispy Lamb Sweetbreads to Roasted Marrow. Somehow, we achieve consensus of Beef Tartare, an Artisan Cheese Plate, and Lamb Ribs.

Although I thought the tartare would steal the show, I’m not crazy about their chopped-boiled-egg approach or the cabbage chips which are far from the promised sauerkraut. A raw cow’s milk cheese, paired with walnuts, orange marmalade, wine soaked pear slices and a blueberry honey reduction sauce nearly steals the show. However, the ribs are roasted nicely and slathered with yogurt, cilantro and lime. They are the clear winner at the onset.

For my main, I opt for the Duck Gnocchi. Served on a skinny plate, looking like a pasta braid, the colorful dish exploits pops of mandarin orange, red chips of fresno pepper, buttery folds of gnocchi flecked with herbs, and slices of green pear, all on a puree of parsnip. One forkful tells me it’s an expertly prepared, rustic meal that screams Michigan. As such, it doesn’t delve into unknown or risky territory. It is comfort food, well prepared.

Sides include grilled mushrooms (of which I do not partake); roasted Brussels sprouts (which seem too heavily dosed with soy); and breadcrumb crusted macaroni and cheese (a couple bites of which satisfy my need for cheddar). I do admire the solitary bite of my brother’s smoked pork chop, and I sneak a nibble from Juliet’s “beast of the day” suckling pig served Southern style with black-eyed peas.

As we turn in our valet ticket and pay the dinner bill, I’m somewhat torn. On one hand, the food is pretty good. On the other, I’m not exactly blown away by the creativity or depth of flavor. Sure, plating is phenomenal, but taste? I guess I expected something more bombastic from an Iron Chef.

Valet parking right outside Roast’s entrance makes dealing with downtown Detroit traffic (and impatient city drivers) a breeze. We are seated quickly in a semi-circular booth, which always seem so cozy and welcoming. The restaurant’s interior is filled with leather-paneled columns, tree limbs still clad in bark, and soft glowing lights.

The Steak Tartare has visible chunks of hardboiled egg and capers. It’s served with housemade sauerkraut. The tartare is flavorful and I love the texture of the hardboiled eggs, but the sauerkraut is disappointingly tame.

The Lamb Ribs are hefty with a crisp outer layer that snaps when bitten into. Underneath lies rich flavorful meat, tender at the bone. The garnishes of yogurt, cilantro and lime wedges make me pine for pita bread! This is my favorite appetizer of the night.

I have been avoiding meat for over a week to justify ordering a big juicy steak, but when our server explains the Roast Beast of the day is braised pulled pork with black eyed peas, collards, and spicy green beans, I know I’ve got try it!

As if that weren’t enough, Bryan and I agree to order sides of Mac & Cheese, Brussels Sprouts, and Wild Mushrooms. Kudos to Jeremy for recognizing we don’t need sides after those generous starters. But, you know me...I think the sides at a steakhouse are the best part.

The entrees arrive first and we all dig in. Jeremy’s Gnocchi in duck ragu is tasty, but there’s not much duck in sight. My pulled pork is solid, but I’ve had better pulled pork closer to home. (I am admittedly a snob when it comes to all things porcine.) The collards, beans, and black eyed peas are divine and I dunk yet another slice of warm bread in the sauce collecting at the bottom of my dish. We all decide Bryan’s Smoked Pork chop is the clear winner. It’s juicy, earthy from the smoke, and sitting on a huge pile of creamy polenta.

The sides are all quite good, but nothing too innovative. Creamy macaroni and cheese with toasted breadcrumbs, roasted Brussels sprouts with a tangy vinaigrette (maybe too tangy), and sauteed wild mushrooms, nice and caramelized. We’re so stuffed we barely make a dent in the sides and end up leaving much of our entrees on the plate as well.

We probably wouldn’t drive this far again just for dinner, but Roast made for a fun and delicious meal before a morning flight out of Detroit Metro.