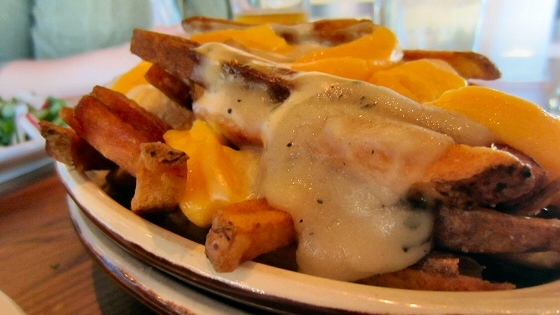 I’ve been a devotee of Grand Rapids Brewing Company ever since moving to the area from Saint Louis. My brother and I would spend many an evening on the deck during summer, sipping Pooh Beer and watching the hops grow up the trellises. That was a decade ago, however. Now the 28th street location is long gone, the brewmaster working at the B.O.B., and the reincarnated GRBC rescued from obscurity by the savvy entrepreneur, Mark Sellers. Erected on the sweet spot corner of Ionia and Fulton, and decked out inside with repurposed rustic wood, the new pub seems destined to succeed.

We show up at the crack of lunch and have our pick of tables. Our server is a funny, on-the-ball gent who is more than willing to recommend his favorite dishes and offer up tastes of any of the beers. I’m not overwhelmed by the style of many of the brews; they seem to adhere to very traditional standards, and I tend to like the weird beers. Still, I rate the Beer City Rye PA, Chaffee’s Crater Black IPA, and Rosalynn Bliss Blonde above the cut. They’re all very drinkable, without offending. I just yearn for something wacky on the roster.

The food has only gotten better. I’ve been to GRBC a few times before and found the quality of preparation has improved. Sometimes you expect a dip in execution or ingredients from a restaurant, but not here. Small refinements have elevated pub fare to new heights.

I immediately order Pork Belly Lollipops, my favorite thing on the menu. A thick chunk of pork arrives, pierced through with a plastic toothpick, squatting on a shallow lake of apple butter BBQ sauce. This typifies the evolution of something so simple. When I first tried it, the pork was quite fatty, somewhat flabby, and the sauce more like grocery store BBQ. Each time since, though, the quality has improved so now it’s a crisp, meaty chunk of pork belly and the apple tang comes through in the sauce. Amazing.

We all dive into more apps, including Fried Michigan Pickles served with avocado ranch dressing that are crispy, golden and puckery inside; I’m not a huge fan of the Buffalo Cauliflower topped with shredded carrots and crumbled bleu cheese, sided with celery, but everyone else is; Scotch Egg served with hop mustard is a pork lovers dream; the cheese on the Poutine looks like it could have done with a bit more melt, but the salty gravy makes up for any shortcomings; and, finally, the Shrimp Hush Puppies elicit more moans of pleasure and gutterances of surprise with their house made tasso ham and tabasco-lime aoili. Truly a feast among feasts!

Only...that’s the just the starters, y’all.

LettersToJ and I decide to split the hand cranked fresh sausages. Drunken Kielbasa, served with house kraut and spicy mustard, and the Smoked Polish Sausage, served with a side of potato salad, are both good renditions but nothing too out-of-the-box. Pop it into a pretzel bun and down the hatch. Currywurst with a side of mango chutney, however, is something to crow about with nicely balanced seasoning in the meat. Still, it pales in comparison to the magnificent simplicity of Spring Lamb Merguez. Spicy, juicy, tender and succulent, we step all over each other offering bites to our wives, crooning, “You must try a bite!”

Despite my doubts, Juliet offers a bite of her Pimento Patty Melt and it is fantastic. Next time, I’ll be ordering that. Or maybe the Belgian Farmhouse with ham and pear. Definitely one of them.

I’ve been wanting to get to the new Grand Rapids Brewing Company since they opened, but a hectic travel schedule earlier in the year derailed any plans. Not for Jeremy mind you; he made it there a few times, even waiting in line on their opening day, I believe! But the stars have aligned and today we’re heading downtown for lunch. Even better, Cookie and LettersToJ can join us!

Just as when the four of us were together in Manhattan in February, we begin with a mess o' appetizers. I order deep fried dill pickle chips with avocado ranch dipping sauce. Jeremy asks for four pork belly lollipops to share with the rest of the table. And our luncheon companions order up shrimp hush puppies and buffalo roasted cauliflower. We sip our beers while we wait, which isn’t long at all.

First up is the pork belly. Four generous squares are speared like lollipops and sitting in a puddle of apple butter barbeque sauce. It’s pork belly...what can I say that hasn’t been said before? It’s crispy, fatty, and totally divine. The fruity, sticky barbeque sauce sends it over the top. I use a knife and fork on mine to cut as many small bites as I can because I know if I eat it like a lollipop, it’d be gone in one bite.

The pickles are pretty standard, though they’re served in a mini-fryer basket which is darn cute. The avocado ranch is tasty and the batter on the pickles is somewhat sweet and slightly spicy. Though my initial reaction is so-so, I find myself going back for seconds and thirds.

The buffalo cauliflower and hush puppies come out together and both are addictive. The cauli florets have been roasted, then tossed with buffalo sauce and served with carrot and celery strips (think garnish, not sticks) plus bleu cheese crumbles on top. I know I’ll lose foodie cred for writing this, but I think I could give up chicken wings forever if I could substitute this cauliflower instead.

Hush puppies are a mixed bag most of the time. I find them either undercooked, ending up with a mouthful of hot raw dough (blurgh!) or overcooked with the texture of styrofoam packing peanuts. Then when restaurants throw in ham and shrimp it usually ends up tasting a bit like pencil erasers and old fish. Well, Grand Rapids Brewing Company has perfected the shrimp hush puppy. Perfectly seasoned and cooked, these little balls are studded with salty tasso and sweet shrimp, both still ever so slightly juicy. These hush puppies are so good, they don’t even need the chile lime aioli on the side, but it certainly doesn’t hurt!

I flirt briefly with the battered cauliflower sandwich with smoked beet (yes, beet) bacon, but, always a sucker for pimento cheese, I land upon the pimento patty melt. Smothered in caramelized onions and house made pimento cheese, you’d be hard pressed to find a messier or more decadent burger anywhere. I end up knife and forking it only because I get tired of licking pimento cheese off my fingers.

Somewhere along the line our table orders the poutine and Scotch egg. Because French fries in gravy and a deep fried sausage-bound egg is...necessary? Clearly it’s overkill and we’re all just too full to really appreciate either, but everyone’s in agreement both are solid.

Finally, while I’m not a big beer drinker, I truly enjoy the Rosalynn Bliss Blonde throughout the meal. It’s light with hints of mango, apricot, and peaches on the palate. I’ll be back for more blonde ale and that cauliflower sandwich soon!