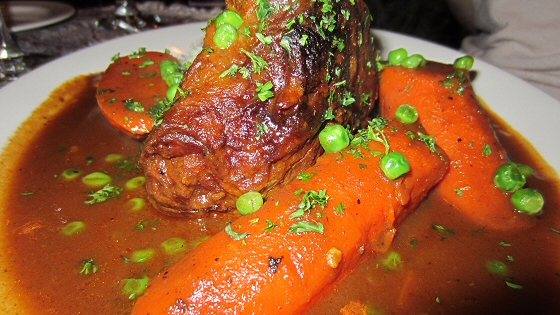 (Grand Rapids, MI) — Living downtown Grand Rapids, we seldom get a chance to visit the Kentwood area much anymore since we sold our house in the ‘burbs several years ago. When we do get out that way (usually to stock up on wine and pizza dough at G.B. Russo), we also keep an eyeball out for any restaurants we’ve yet to visit. Wouldn’t you know it? Right up the road from Russo’s is Shiraz Grille. Despite our love of Mediterranean cuisine, we haven’t been able to schedule a dinner until now...

From outside, Shiraz doesn't look like much. The squat building, located behind a gas station, could be an ice cream parlor or a jewelry store. However, looks can often be deceiving.

A hostess stand greets us, flanked by white columns snaked with greenery to give the place an oasis vibe. To the right is a small bar. Beyond are numerous tables, well-appointed with colorful tablecloths. Somewhere, soft Middle Eastern music plays. We are shown to a four-top, given leather-bound menus and water, then left to ponder our choices.

I’m thinking Baba Ghannouj sounds good, but Juliet quickly points out the sampler platter where you can order any four of the apps for just $16. The sampler arrives on a large platter. Hummus is pureed chickpeas and garlic blended with Tahini and olive oil. I find it to be pretty standard, and not even as good as Juliet makes at home. Maust Khiar is a creamy yogurt with diced cucumber, chopped walnuts, and currant raisins. It’s cool and refreshing, with a nutty undercurrent beneath the tangy Greek yogurt. Kashk Bodemjon is roasted eggplant cooked with sauteed onions, garlic and mint, mixed with whey, then topped with caramelized onions. I find it pleasantly spicy, with the sweetness of the onion bringing me back for more. Finally, the fourth app is Persian Shrimp Cocktail. The pomegranate-glazed shrimp has been grilled then chilled, and sided with a mint yogurt sauce. Yowza! It is sweet, succulent, perfectly cooked and finely spiced. The mint sauce takes it through the roof.

About this time, on my second glass of Harlow Ridge Pinot Noir, the lights dim. A woman materializes from the kitchen, wearing gossamer sheets that barely conceal the fact she’s a belly dancer. On Thursday nights, there’s a show. She plays a traditional song and begins to dance, clearly enjoying it, as are most of the other patrons. It’s fun but not really my thing.

Between sets, we order entrees. From the Khoreshes section (a delicate stew or sauce combining meat with herbs, fruit, nuts, spices, and rice), I’m drawn toward the Gheymeh Bodemjon, probably because it has split peas and I’m a sucker for peas. It’s a shallow stew of braised beef, yellow split peas, and eggplant in a cinnamon-tomato sauce with Persian sun-dried limes. I also upgrade my rice to the Adass Polo, which has lentils and cinnamon rice topped with raisins, dates, and caramelized onions. In retrospect, I should have skipped the upgrade; it’s good, but the rest of the dish is so overt, most of the light touches are lost. The stew, though, is top-notch. I love cinnamon and tomato together, the spicy sweet aromatic tantalizes in contrast to the fork tender fatty beef. The peas add crunchy texture and the eggplant just a touch of heat.

I never expected to find such authentic Mediterranean food in Grand Rapids, but every bite rang true. When next we’re down toward Kentwood, we’ll be swinging by to sample more of those shrimp.
She Fed:

Shiraz is one of those places we’ve been meaning to visit but never quite found the time, so I’m excited we’re giving it a try tonight. Best of all, Thursday nights feature belly dancing! I’m already scheming how I can surprise my parents with a trip here on a Thursday night when they’re visiting.

All of the starters sound amazing, so we opt for the appetizer sampler—a combination of four from the eight or so choices on the menu. I select the hummus and the Maust Khiar, yogurt with cucumber, walnuts, and currants. Jeremy picks the Persian Shrimp Cocktail and the Kashk Bodemjon, roasted eggplant with onions, garlic, mint, and caramelized onions.

The sampler is delivered with a generous basket of warm pita. The server taking care of the table behind us bragged up the hummus so I’m expecting something spectacular. It’s flavorful but it’s not the best I ever had (which, for the record, appeared in a 2009 issue of Food & Wine Magazine and can easily be made at home). The eggplant spread, on the other hand, is over the top...smoky, garlic-y, and sweet with the crispy onions. The shrimp have been grilled with a pomegranate glaze and are served with minted yogurt. They’re nothing short of divine. The Maust Khiar is great on its own, or slathered over the eggplant, tangy from the yogurt, crunchy with the walnuts, and slightly sweet from the currants.

I knew before we even walked in the door I’d be ordering a kabob, probably the Koubideh, a blend of ground beef and lamb. I’ve had these in other cities while travelling and even made them once in a cooking class. They’re one of my favorites and as tempting as some of the other dishes sound, like pomegranate chicken or Cornish game hen kabob, I want a comforting, standby dish.

But then dinner is presented to a nearby table and we catch a peek of the lamb shank. Four lamb shanks in fact; every person ordered one and I hear murmurs of “This is the best dish here” and “I don’t ever order anything else.” The shanks are hulking towers of meat surrounded by gargantuan carrots and smothered in a dark gravy. It’s a very caveman-esque moment and I can think of nothing more comforting than ordering my very own.

It’s even better than it looked across the room. The lamb is braised in a savory tomato sauce, scented with cinnamon and other exotic-smelling spices. The meat seems to surrender and slip from the bone as my fork approaches. A slight caramelized crust has formed on the top of the shank. I love that sticky sweet meat-bark and pick at it. The rest of the lamb is tender and succulent, such a lovely dish that I ignore the green peas (a veggie I despise and dread) mixed throughout. But it is far too much for one person. I give up and put my fork down, already dreaming about how I’ll enjoy the leftovers at home.