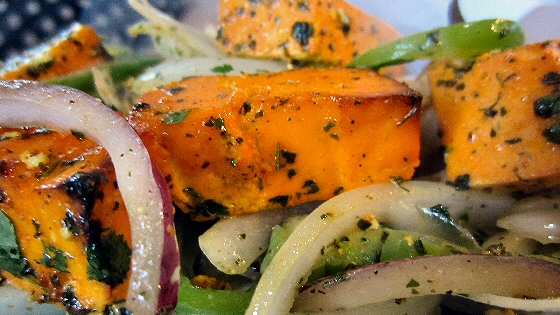 (Grand Rapids, MI) — Joey V’s pizzeria, conveniently located across the street from The Clique bowling alley, has been a mainstay of late-night debauchery for many years. Earlier this year, however, a transformation began to take place. The sign outside proclaimed the establishment was now Palace of India and a new coat of paint inside sought to eradicate the sports theme. When a mid-week lunch to check out the menu was suggested, Jeremy jumped at the chance to spend time with JoJo and Ivy, and hopefully some good curry...

I stand in the sun-drenched parking lot, hand shading my eyes as I look up at the sign towering overhead. Oh my... they spelled “cuisine” incorrectly. Cusine. In big red letters, no less. I try to shrug off early misgivings and head inside. Truth is, those misgivings began months ago when, after a bowling night, my team ordered our usual pizza at the mid-transition restaurant and found it to be horribly changed and not for the better.

On the doors are taped sheets of standard printer paper, reminding the visitor of Joey V’s happy hour. What the heck? Joey V’s happy hour and not Palace of India’s happy hour? After some consideration, I assume the current liquor license is still under Joey V’s business name. Certainly doesn’t support branding, but I can see the fiscal necessity of keeping the old moniker.

The restaurant is empty except for two other patrons. I am greeted solemnly and shown to a table. As many of you know, I do not like buffets. I took the time to call ahead and make sure we could order from the menu. After receiving water and a basket of Naan, I ask to be given a menu. “No menu, just buffet,” I am told. “But I called earlier to make sure we could order—” The server nods, cutting me off, “Yes, one minute.” He scurries away and returns with menus. I’m a little put off at his response, particularly because my phone conversation made it seem like the menu was a standard option. Not so. To top that off, the menu is their standard dinner one; there are no lunch portions, only the expensive entrees.

JoJo and Ivy arrive shortly thereafter, and I explain the situation. They roll with the punches, though, so we dig into our options. I’m feeling adventurous, so order the Goat Curry ($13.95). It’s a lovely stew with great depth of flavor, but the meat has some sharp-edged bones in it caused by haphazard butchery and some tendon bits that are inedible. Ivy gets the Gosht Tikka Masala, which is similar to my dish, except with mutton instead of goat. I find the mutton a bit greasy with an unpleasant aftertaste.

Luckily, JoJo (being the sensible vegetarian) orders the Bengan Bhartha, which is barbecued eggplant with onions, tomatoes, ginger, and fresh coriander. It’s like Baba ganoush but less blended, and it’s so delicious I immediately regret my goat decision. She had also ordered the Paneer Tikka (Indian cheese, onions, and bell peppers) as an appetizer but it comes near the end of our meal. Still, it’s smoky and cheesy, with just enough spicy sweetness to keep me coming back for more.

Halfway through the lunch, our server asks if we’d like more Naan? Yes, thanks! Would we also like rice with our entrees? You bet! Well, each of those “refills” cost extra, as it turns out. Even the first basket of Naan, delivered unannounced or requested, cost us money. A rice add-on for essentially small pots of stewed meat is ridiculous. And no lunch portions? Just silly.

Despite JoJo’s excellent vegetarian choices, the lackluster service, nickel-and-dime extras, and questionable meat quality chase me out the door. I’m sure there’s good Indian CUISINE in Grand Rapids, but this isn’t it.