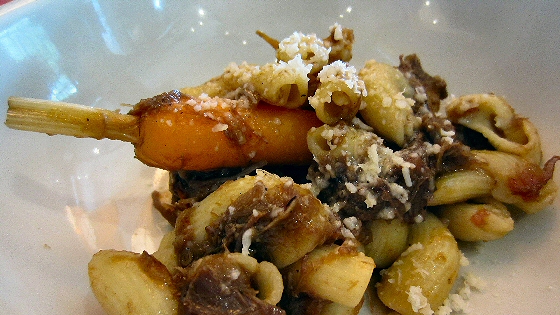 (Grand Rapids, MI) — Trillium Haven restaurant has only been open about a year, serving up locally sourced and sustainable handcrafted foods in Eastown, but seemingly out of nowhere we received notice that it would be immediately rebranded as Terra GR. A series of press releases assured us Chef Joel Wabeke would still be running the kitchen, which was good news since his sure hand had guided the menu successfully since inception. We were invited to attend a media luncheon to sample some new dishes, and while SheFed was away on business, HeFed drove down for a look-see...

Make no bones about it: I love Joel Wabeke’s food. Our first visit to Trillium Haven told us all we need to know about his style of preparation. So, I’m slightly nervous as a I drive to the new Terra GR. Will the menu change significantly, despite the reassurances I’ve read elsewhere that things will remain mostly the same?

Truth be told, I’m nervous for another reason too. Those of you who know me well realize I’m an introvert by nature. I’m not particularly comfortable in social situations. I don’t network well. I’m painfully shy. I feel most comfortable when I’m alone at home, writing, listening to music with noise-cancelling headphones on. Sometimes my introversion can be off-putting for other people and is mistaken for aloofness or elitism, and that just compounds my own shyness. If you put me in a room with someone whose talent and skill I admire, well...I tend to either clam up or babble on inanely. I can’t help it. (Ask me sometime about when a Food Network show host stepped into the elevator with me and tried to initiate conversation.)

I figure all of those things will happen when I meet Chef Joel today. I won’t be able to slide into the restaurant unnoticed. This is a media lunch and I’m supposed to mingle. Mingle. Has there ever been a more unnerving word? It sounds like the dissolution of self, to my ears. Despite that, I gird my loins and step inside the restaurant. I am the first to arrive.

Decor has changed somewhat, featuring more slate or chalkboard colors, but overall it feels much the same. I am greeted by some of the staff, who cheerfully inform me the kitchen will be sending out samples of salads, sandwiches, and the new house-made pasta menu. A server offers me a glass of beet lemonade, which I find icy and delicious, reminiscent of the beet margarita I tried a while back. Then, out of the corner of my eye I see a man in white approaching me.

I only know Chef Joel Wabeke by reputation, some brief hellos at events, and via some occasional chatter on Facebook. This is to say, I don’t know him well but from what I’ve gleaned, and judging by the company he keeps, he is a good guy. He’s self-effacing, communicative, and honestly interested in what you have to say. There’s an openness to his attitude and demeanor that invites you speak your mind. He puts you at ease, much the same way his cooking lulls you with seemingly simple preparation. You want to know him better, and you definitely want to eat more of his food.

We speak for a bit, my nervousness abating already. Other media folks arrive, and I don’t want to monopolize him so I slink away surreptitiously to take some photos. My stomach, too, has recovered from any initial angst and urges me to scan the new menus. Lunch consists of starters like pickled veggies and pate, sandwiches, soups, salads, and sides. Dinner is more expanded, featuring flatbreads, entrees, and housemade pastas. Already, I am salivating.

My first dish is the Gazelle Salad, containing seasonal greens and veggies (kale and radishes, in this case), French green lentils, farro, and a cumin vinaigrette. I’m a sucker for farro, so this hits all the right notes for me. It is refreshingly bright, with an earthy tang from the dressing.

Next up is a taste of Pastured Lamb, slow-braised and shredded, with glazed carrots, parsley, gigli pasta, and sprinkled with sar vecchio. The meat is tender, with a faint vinegar zip that pairs so well with the sweet carrot that I yearn for a glass of red wine to wash it all down. I immediately think of Juliet, and will lay odds that she orders this when we’re in next. (If she doesn’t, I probably will.)

At Chef’s insistence, I grab a bowl of the Shrimp & Bacon pasta next. Shrimp can be touch and go for me, but his story of how the bagna cauda is made using the shells of the crustaceans ultimately convinces me I should try it. I’m glad I did! The smoked bacon teeter-totters delightfully with the saltwater kiss of the seafood. I love the thick bucatini, slurping up every last bit. (And now, I think, Juliet will order this one. Maybe my concept of “no sharing” should be reevaluated?)

Finally, I snag a half-sandwich: the Terra Cuban. Layers of mixed greens, house-smoked pork, bacon, swiss cheese, and McClure’s dill pickles have been lain into a house-made baguette slathered with dijon mustard. The contents are surprisingly thin but the flavor packs more punch than sandwiches twice its size.

More media types have arrived, including a woman shooting video at various angles. I’m starting to feel a little agoraphobic, so decide it’s time to go. Joel appears tied up talking with someone else, so I instinctively head for the door, ready to slip out unnoticed and escape back to solitude. My hand is on the door. I push...

But, then, something comes over me. I let the door shut again. It feels wrong to depart so unceremoniously. Leaving without saying goodbye would be akin to attending a birthday party without bringing a present.

I turn, walking back to wait patiently while Joel finishes his conversation with one of the other guests. Then I shake his hand and thank him for all the fine food. “What would you change?” he says. I am shocked he would even ask. I smile back. “Don’t change a thing. Please.”

If you have not yet treated yourself to Trillium Haven, then do yourself a favor and get ye hence to Terra GR, immediately. Should you happen to see Chef, say hello for me and tell him HeFed sent you.