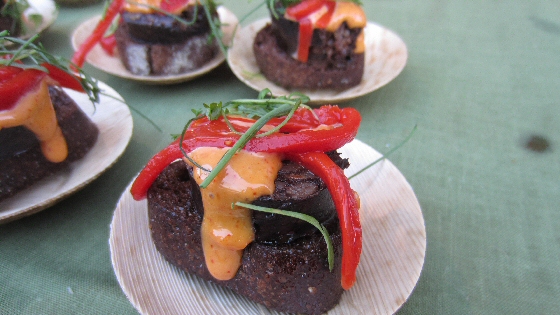 (Los Angeles, CA) — It’s the last evening party of the 2013 Los Angeles Food & Wine event, called “Live on Grand”, and Chef Curtis Stone is set to host a final strolling reception on the red carpet. Despite a full day of cooking demos and seminars, another gaggle of good looking people shows up to rub elbows with celebrity chefs. HeFed is there also, exploring strange new dishes, seeking out new ingredients and concoctions, boldly going where few foodies have gone before...

Space. Need more space. I could use a reprieve from the crowds. It almost seems not worth it anymore, to jostle in amongst the hungry hordes for yet another delicately assembled dish, smilingly handed down to us from the Gods Of Cooking. But that’s just me, getting burned out after three days of excess.

No shame to admit, I’m dragging. The “Beer & Bites” seminar this morning blew my socks off, followed by a leisurely walk from table to table at the Grand Tasting. As if that weren’t enough, the afternoon “Bacon & Bourbon” session turned out to be disappointing. My fuel tank is empty and the thought of more booze and food makes me shudder. I’m a foodie, not a competitive hot dog eater, dammit! Somehow, I put on my big boy pants and shuffle back to the red carpet for one last binge.

Grant Achatz (Alinea, Chicago) has assembled some kind of ferris wheel contraption which dispenses a fruit-laden cocktail. It’s a refreshing, if sweet, sip that fortifies me for the carnival atmosphere ahead.

Chef Levi Mezick (Restaurant 1833, Monterey) tops a chunk of toasted brioche with a jiggly hen egg, a crispy bit of prosciutto, and a judicious dollop of truffle butter. It’s a breakfasty delight of rich yolk that’s easy to slurp up in one bite. (Which explains why I don’t get a good picture.)

Chef Robert Liberato (STK, Los Angeles) skewers a grilled disc of beef tenderloin wreathed with blue cheese, tomato confit, and shallots. I like it best with a swallow of red wine, but otherwise seems straightforward.

A friend brings Juliet and I a couple dishes from some unknown source. She scarfs down the fried oyster, proclaiming it extraordinary, while I dig into ceviche with a plantain chip spoon. The fish is tart with citrus curing, with a touch of spicy seasoning. It livens up my fading taste buds though!

Next, I am lured by a sunnyside-up quail egg on top of wagyu beef belly hash prepared by Chef Stephen Kalt (Caulfield’s, Beverly Hills). It’s a gorgeously bright orange spoonful with fatty, rich braised beef underneath. In one mouthful, it’s so damn good I want to dance in place and beg for another.

At the Mijita booth, baby back ribs are simply prepared in a tomatillo sauce and crusted with panko for texture. Again, even though I can feel the end of my romp approaching, this is such a perfect representation of the rib that I want to fill my pockets for a midnight snack later.

I ask Chef Verite Mazzola (Taberna Arros y Vi, Santa Monica) what the cider-braised Morcilla might be? Turns out, it’s Spanish blood sausage! She’s added harissa aioli, scallions, and piquillo peppers for some extra heat. A chunk of dark bread underneath helps absorb liquid, but otherwise this is one of the best iterations of blood sausage I’ve ever had, absent of any coppery tones.

To help offset all the meat, I belly up to Chef Kamal Rose (Tribeca Grill, NYC) for a ciambotta (stew) of late summer vegetables. Zucchini, squash, and carrots float serenely in a warm, thick broth which deeply comforts, regardless of the 80 degree temperature outdoors. I eyeball dessert nearby, but pass, instead wandering around aimlessly, taking more snapshots, and trying to avoid the crowds.

Space. I’ve found some space atop the Lexus booth, where there’s a rooftop patio no one has yet discovered. I relax, breathing in the warm air laden with cooking and too-tanned flesh. From my vantage, I can see the cityscape and the people below, like ants swarming enroute to their next meal. I consider sticking around for a bit longer, now that I’ve got my wind back, but for me the party is over. I descend down to the red carpet and unerringly stroll out onto the street, heading to the hotel without looking back.