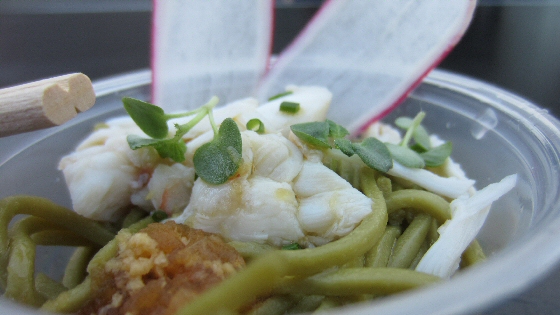 (Los Angeles, CA) — On the first official day of the Los Angeles Food & Wine event, most attendees return from a special lunch prepared by celebrity chefs at different locations around the city. We passed up Michael Chiarello, Charles Phan, Michael Mina, and Scott Conant for Reddington, Mendes, and Dayag at L’Ermitage. Now, after a short nap, HeFed is ready to walk the red carpet again for Asian Night Market hosted by Iron Chef Morimoto...

Although lunch wasn’t quite the spectacular affair I’d hoped, it was still pretty damn good and all that champagne hit me hard. A couple hours in bed helps set me to right, and I’m feeling much better as I dress in dark slacks and a nice short-sleeved shirt, then head out. The walk to the event seems to be getting shorter. The early evening is pleasantly warm and still, as I imagine LA often must be.

I’m overwhelmed with deja vu. All the tents and booths are the same, though some of the chefs have rotated out to bring in new ones, and of course the dishes are all different. This is Morimoto’s shindig, so the offerings have an Asian spin. I grab a glass and set out for some grub.

Stella Artois is still serving up beer, but Kirin has also appeared tonight, pouring pints topped with frozen beer foam. I really like Kirin Ichiban with Asian food. It’s not my beer of choice if I’m just drinking, though. This icy foam is pretty cool (pun intended), keeping the brew cold all the way down to the last chug.

My first bite almost ruins me for the rest of the night, it’s so good. Chef Chris Oh (Seoul Sausage Company, Los Angeles) serves up a Flaming Ball, with spicy pork, kimchi, and cheese, deep fried and drizzled with “DMZ” sauce (which tastes like sriracha aioli). It’s crunchy and very, very spicy with a slight pickled taste. Yum!

Next, I slide over to Chef Jorge Mijangos’ booth (Nobu, Los Angeles). His small plate is a pairing of two tacos, one with wagyu beef and one with salmon sashimi. I love them both. The beef is tender, brightened with a squirt of lime and spiced with shallots and cilantro sauce. Roasted jalapenos and wasabi give the fish a kick. The taco shells are delicate and crunchy.

I’m not that keen on crab dishes; still, I have to brave a bite of Chef David Lefevre’s (M.B. Post, Manhattan Beach) chilled soba noodles and blue crab bowl. The thin slices of radish poke up like rabbit ears, adding a bit of crunch and heat to the flaky crab meat and firm, slightly minty noodles. It’s a playful dish that’s just fun to eat.

Next: Ribs! Chef Bryant Ng (The Spice Table, Los Angeles) slices up boneless beef ribs that have been generously spiced and sauced with pineapple-anchovy, served in a lettuce wrap. It’s a nice bite of Vietnamese cuisine and comes in second so far, behind the Flaming Ball.

Dessert starts early because I just happen upon the booth when it is empty. Chef Carlos Enriquez (Patina Restaurant Group, Los Angeles) amazes onlookers with his Nitro Cotton Candy. Basically, they’re little frozen puffs of condensed cotton candy that, when you bite into them, release the nitrogen inside so you’re literally breathing smoke. Despite the gimmicky nature of the candy, it’s actually pretty tasty. Almost as tasty as the coconut tapioca he’s also made, with a gelee of passion fruit, sesame brittle, and cilantro.

I’ve been wanting to hit a food truck ever since landing at LAX. Thankfully, instead of a mobile pizza station, the Kogi taco truck is parked on the red carpet. Barbecued pork, kimchi, and jalapeno are presented in a cardboard box on a single tortilla. It may not be the fancy food served up elsewhere but one bite reveals the truth: this is the best food at this event! Even though I’m pretty full at this point, I wolf it down with no shame. Somehow, I fight the desperate desire for another. It’s tough to walk away.

Finally, I end up at Morimoto’s booth, where he is happily posing for pictures. His staff lovingly assembles rice paper cones filled with takoyaki. The deep fried tempura balls are creamy hush puppies, inside which are chunks of octopus. There must be something wrong with me because I’d ordinarily do backflips for any tentacle; however, this just doesn’t appeal to me. The octopus seems more like eel, very chewy, with a seaweed aftertaste.

About this time, Juliet joins me to try Chef Jet Tila’s (Chef Jet, Los Angeles) curry noodles with braised tendon. She really digs the Thai seasonings, but I’m too full to even try one bite. (Although I have room for one forkful of “coffee fluff” from Fluff Ice.) Truth is, I’m wiped out and my taste buds are done for. In a walking food coma, I stumble back to the hotel, wondering how I’ll manage at tomorrow night’s event hosted by Curtis Stone.