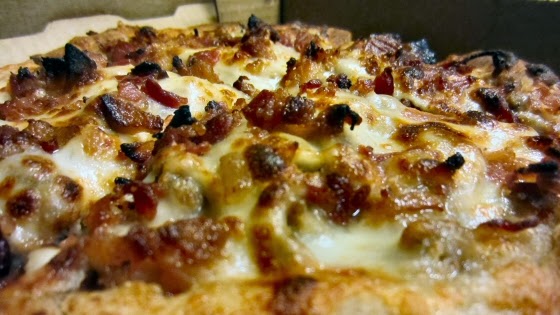 (Kalamazoo, MI) — If there’s one constant, one go-to meal upon which both of us can agree, it’s pizza. That’s not necessarily unique, of course; most humans on the planet would agree pizza is like a universal language. For our part, we might not always prefer the same toppings, but we generally achieve consensus on where to get the pie. So it’s decided, dinner on this Monday evening will be ordered from one of our old haunts: Bilbo’s Pizza In A Pan...

We both grew up in or around Kalamazoo, so we’re very familiar with Bilbo’s. As a young man, I had the opportunity to encounter the establishment at both locations, but never really paid it much mind as anything other than a pizza joint, until much later. Then, I fell in love with the whole wheat crust. Sweet, yeasty, and thicker than most pie dough. I’ve never tasted anything like it in all my travels. Now, after nearly a decade and a half, I find myself working in Kalamazoo again. When Juliet asks me to pick up something for dinner, I immediately agree.

Even though the campus location is long gone, the larger new building on Stadium Drive still feels like Bilbo’s inside. They brew their own beer, which is pretty good, but I’m here for the pizza tonight. I called ahead after scanning their online menu, so when I show up I can see the boxes resting under the heat lamps. Secretly, I had hoped they were running a bit behind so I could slug down a pint of Wizard Wheat or Duff beer. No such luck. I pay up, grab the boxes, and race home. The smell of food in the car is maddening.

By the time I get home, the feast needs a quick refresh in the oven. Juliet does the honors. That gives me time to pinch the wife, pet the cats, and change into some sweats. When I come back downstairs, we’re ready to eat.

As an appetizer, I got six Smoked Wings. These are only available at the Stadium Drive location, so don’t try ordering them in Portage. Honestly, I did not have high hopes for them. Juliet is the wing aficionado; I merely tolerate them. These, however, may have changed my mind. They are fantastic! Heavily smoked, the plump drums are even better when dipped in chipotle barbeque sauce. They are nearly as good as Hooters’ cajun wings.

Wisely, I opted for a small Dragon Feast on whole wheat. It’s easily two inches high and each quarter slice weighs about a pound...or seems like it. It’s all meat, baby, with pepperoni, ham, sausage, amazing hickory smoked bacon, and a blend of cheese. I usually prefer a more diverse mix of toppings, but I haven’t had meat in a while so I got greedy. Even though Juliet complains of an underdone crust, mine is crunchy crispy perfection.

You might think ordering Cheezy Stix (whole wheat, of course) with pizza is overkill, but you’d be wrong. Two words: dill dip. It might cost another $2 but the dill dip is worth every penny. Creamy, herbaceous, and addictive as hell, once you get a taste you’ll crave it way too often to be good for you.

As a good friend likes to say, “Even bad pizza is good pizza.” I couldn’t agree more...but I’d rather have the good pizza, given a choice. Thankfully, Bilbo’s continues to deliver (even if they don’t deliver).

In the interest of full disclosure, I freely admit that I love, love, love Bilbo’s. In the 25 years we’ve been eating their pizza, stix, and salads, the food has always been great and the service spot-on with perhaps a minor miss here and there.

I discovered Bilbo’s with friends in college and was always a huge fan of their Crispy Garlic Bread. With a side of pizza sauce for dunking and a cheap draft beer, I was in heaven. Then in grad school, Jeremy and I discovered their whole wheat pizza crust. This was well before whole wheat became mainstream. My new favorite was their Garden of Eatin’ variety. Who ever heard of zucchini on a pizza? This was also before vegetarianism or even flextarianism became popular, so it usually took a little doing to find someone to share a whole wheat vegetarian pizza with. (I found offering to pay was a good start.)

After school, we moved to St. Louis to begin our careers but always made a special stop by Bilbo’s in Kalamazoo when we came home for vacations and the holidays. I remember a few times we’d take a pie home and rewarm it in the oven, though it was never as good as hot from their ovens.

Now that Jeremy’s working in Kalamazoo he’ll bring Bilbo’s home for dinner, typically twice a month. Tonight he’s decided on a small Dragon Feast pizza with pepperoni, ham, sausage, bacon and cheese, on whole wheat crust of course. Evidently he’s in the mood for meat because there’s also six chicken wings. To round it all out, he’s also snagged a regular order of Cheezy Stix.

I’m not a big fan of pizzas with all meat and no veggies, so I take the smallest piece. I grab half the stix, though, and immediately dig in. There’s absolutely nothing better than Bilbo’s whole wheat Cheezy Stix with a side of Creamy Dill Dip. The sweet nuttiness of the wheat crust with a drizzle of garlic butter (the same butter they slather the aforementioned Garlic Bread in) smothered in herbed cheese, then dunked in rich dill dip. It’s nirvana, pure and simple.

The pizza is decent enough, but there’s too much salty meat for my tastes and it could use some bell peppers or dare I say...zucchini. Also, this is a thicker pan-style crust and its center is slightly gummy, as though it could have used a little more time in the oven.

Jeremy announces the wings are smoked, so I grab one and give it a go. My favorite smoked wings are at Virgil’s BBQ in Times Square, but these are a very close second. And they don’t require airfare!

Despite the gummy crust, I’m already anticipating our next Bilbo’s dinner. Wings and stix with dip are a given. As for the pizza, I leave the toppings to Jeremy; whole wheat crust is a given!