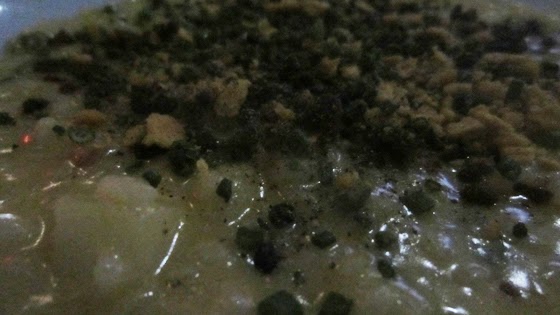 (Chicago, IL) — Whenever we’re out of town, visiting a new or old favorite city, there’s a certain pattern that emerges wherein we become enamored of a lunch restaurant and end up spending too much time there. As a result, we often ruin the chances for our dinner plans. On this Saturday in Chicago, we enjoy a long visit to Eataly, soaking up the suds in Birreria then splitting an amazing ribeye steak at La Carne. By the time night falls, our stomachs are uncertain whether our reservations at Graham Elliot Bistro will be our downfall...

One of the reasons I chose Graham Elliot Bistro is the Charred Octopus on their winter menu. I’ve been looking forward to it so much, I passed up any tentacled critters at Purple Pig. Now that’s willpower! Since GEB is a couple miles from our hotel, and our dogs are still tired from an earlier shopping spree at Eataly, we decide to hop a cab. The eatery looks like any modern one you'd find in NYC, frosted glass windows and woodwork facade. We pay the cabbie and go in.

There’s a couple moments of confusion as the hostess informs us they’re running a little behind. Won’t we have a drink at the bar? Sure, it looks swanky, red lacquer and illuminated cocktail bottles. We’re in no hurry so begin to take a seat. Suddenly, the hostess tells us our table is ready? We shrug and are led past the open air kitchen all the way to the back, where there is very little light.

Our waiter is young, slick and good looking, dressed like a Gucci male model. He asks our drink preferences—Morning Wood from Local Option for me, an oak aged coffee ale which is just plain awful—then slinks away into the dimness. I glance around and get the impression of too-hipness, high heels, inane dialogue, and covert touching of hands. Maybe I’m just getting too old for this scene.

I squint at the underlit menu. My heart sinks. No octopus. None. Crap. Nothing else leaps out at me from the sparse offerings, so I ask Juliet if she’s down with a tasting? She seems about as uninterested in the menu and agrees. We choose a “beginning”, a “middle”, and an “end”.

I start with Cheddar Risotto, apples mixed in, with bacon bits and cheese crackers crumbled on top. Although I find the cheddar-apple combo to be inspired, it’s nearly ruined by the fakey Bac-O-Bits and Cheez-It topping. It’s a sarcastic and ironic preparation that perplexes. Am I supposed to feel good about tasting low-brow synthetic foodstuffs in a high-class joint? Or am I supposed to feel guilty for ever knowing what those foodstuffs taste like to begin with? On top of that, I crunch down on a hard bit of polished rock, almost a pebble. I spit it out, wondering. It’s not risotto and it’s not bacon. It literally clanks off the dishes like a rock.

Next is Roasted Chicken. It arrives on the plate, dissected to resemble some alien creature laid bare, on a bed of wheat berries and crispy kale. The meat is flaccid and greasy, and woefully underseasoned. I leave a substantial amount on the plate and look forward to dessert.

Banana Split is served in a jar, layers of coffee chocolate and caramel swirling between vanilla ice cream and salted pretzel. On top are caramelized hazelnuts, crunchy sweetness to contrast the salt. I delve in with my spoon, satisfied at last.

The hostess helpfully flags down a taxi for us, and we depart back to the hotel where we’ll be pondering this mixed bag adventure for some time to come.

After spending the day noshing and drinking our way through Eataly, we truly have no business going out for dinner. It’s everything I can do to not suggest we stay near the hotel and grab something small at a casual eatery. Not relishing a 35 minute walk in the Windy City’s frigid winter weather, we grab a cab.

The driver gets a little bit lost but drops us just down the block and we arrive a few minutes early even. The vibe is trendy, overly so in my opinion. But I’m a middle-aged Michigander, so maybe dim lights and roaring music are all the rage in the big city. Our waiter is incredibly nice, attentive without being intrusive.

We opt for the Chef’s Tasting Menu so we can try three small courses. I begin with the Polenta with Fresh Corn and Cheddar Cracker Crumbles. The thought of a steaming bowl of creamy polenta perks me up on this cold night. The addition of corn ramps up the sweet butteriness of the dish. The cracker crumbles taste very much like Cheez-Its, which I think is pure genius. Overall, it’s just a divine dish with rich polenta, candy-like corn kernels, and crunchy cracker crumbs. Why do I never think of making fun things like this at home?

My plan was to have fish or eat vegetarian, but the description of Short Ribs with Mushroom, Spaetzel, and Horseradish Cream is too tempting. I love spaetzel, those delightful little dumplings that are soft on the inside and slightly crisp on the outside after a little browning in butter. They always remind me of my Grandfather and the German restaurant he used to take me to for dinner in Grand Rapids, which has long since closed. Nothing beats the flavor combination of tender wine-braised beef and mushrooms paired with astringent horseradish. The spaetzle are cooked perfectly and in no time I clean my plate.

I’m absolutely stuffed and only have a few bites of the dessert course—a Chocolate Ganache Bar with Peanut Foam and Peanut Fudge Sauce. It’s essentially the most elevated version of a Snickers bar I’ve ever had.

A couple of things are bothersome throughout our meal. It pitch dark inside, I cannot comfortably read the menu and you can see from our photos Jeremy’s camera had insufficient light to focus. Secondly, the music is blaring. We are seated at an intimate two-top and are unable to hear each other without yelling. I’m a fan of reasonable mood lighting and an upbeat soundtrack, but squinting to figure out what’s on my plate and shouting at my husband over dinner in public just isn’t my idea of a good time. We might have lingered over a nightcap, but frankly I just want to pay the bill and get back out onto the streets of Chicago which were well-lit and less noisy.

The food was spectacular, but the atmosphere was just too much for us on this particular night. Or in our particular age range maybe!