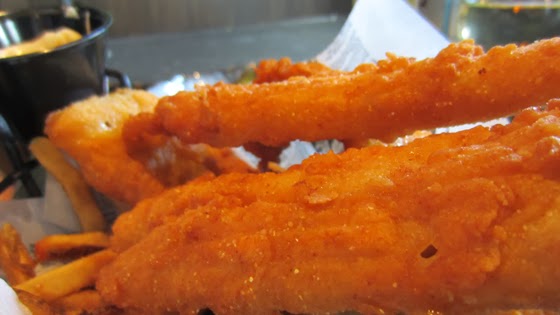 (Douglas, MI) — If we’re going on vacation, we’ll plan out our meals well in advance (usually via OpenTable) but if we’re sticking around, we often will decide our next adventure mere days—or hours!—ahead of time. A couple months ago, though, our good friend Joel reached out to let us know he’d be competing in a bike race in Saugatuck and would we like to meet him and his wife, Delia, for lunch afterward? Dutifully, we jotted down the date in our calendar and began to consider our options. As we drew ever nearer to the day, it became almost fate we’d eat and drink at Saugatuck Brewing Company...

I’ve been to Saugatuck Brewing easily half a dozen other times. It’s not exactly close to where we live now, or where we used to live, but it makes for a nice summer destination if you’re itching to get nearer the lakeshore. For whatever mad reason, Joel has decided to race his bike in February during one of the harshest winters in my lifetime. The least I can do is share a beer with him afterward.

There’s a patio out front, but of course it’s snow covered and inaccessible. Inside, it’s larger than it looks from the parking lot. A long hallway leads back to restrooms, a game area with darts and a pool table, and further back is an events room which is apparently being converted over to more brewing area, and an expansion of the dining room. The pub itself is a kind of Irish or English bar atmosphere with plenty of booths and tables. There’s even a place where you can brew your own beer in small kettles.

I am starving, and I know Joel needs to refuel after his race, so we get a couple pretzels. They’re well-salted, but a bit too chewy...almost stale. It helps to dip the chunks into the spicy-sweet beer mustard dip. That’ll clear your sinuses! I get a pint of Double Black IPA, a hoppy ale with roasted caramel overtones that sports a generous mouthfeel thanks to the 6.8% ABV. Our server is nice enough, but I’m not very tolerant of servers who don’t know what’s on tap. If you work in a brewpub, you damn well better know all the beers that are pouring, what the ABV is, and a general description. If I catch a whiff of uncertainty, I’ll walk up to the bar myself and peer at the taps, maybe even chat with the bartender. I don’t mean to get off on a rant here...

Everyone else seems to be getting sandwiches, so I decide to follow suit. I don’t really want a burger and I’ve had their reuben before. That’s when Chef Nate’s Brisket jumps out from the menu. My mouth is still watering thinking about Greenbush’s brisket, so I can’t resist. It’s served open-faced on a crispy hoagie made with spent grain. Under the slab of porter BBQ slathered meat are two grilled tomato slices. I dig in with knife and fork. It’s tangy-sweet, though I’m not really digging the quality of the meat. It’s just kind of homogenous looking. The taste is fine. I just wish it didn’t resemble a prefab meat byproduct. Maybe it was how it was cut...not sure. Either way, my excitement dwindles until I’m pushing away the plate, picking at the seasoned fries, and drinking a pint of the cask Belgian IPA.

For the most part, I like the beers at Saugatuck Brewing Company, especially the Serrano Pepper Ale. The food, though, has been hit or miss. Perhaps it’s not realistic to expect a brewery to serve up more than traditional pub fare, but I’ve been spoiled by the likes of Stone Brewing World Bistro & Gardens and Brewery Vivant.

When we moved from downtown Grand Rapids to a wooded area along the St. Joseph River, we figured we’d combat any home-sickness with monthly trips back to GR and frequent weekend luncheons with friends in the Saugatuck/Douglas area, which serves as the mid-point for us all. Unfortunately Mother Nature has had other ideas, keeping us housebound for far too many weekends. So we’re nearly giddy at the prospect of meeting Joel and Lia for beers and lunch at Saugatuck Brewing Company.

We find a four-top easily, though the crowd continues to grow throughout our visit. I know Jeremy is starving, having had breakfast much earlier than I did. (Saturday mornings are typically the one day a week I lounge around, eat breakfast late, and linger over coffee.) Even hungrier is Joel, who just completed his second winter bike race of the weekend. When our waitress asks for drink orders, the boys immediately order two soft baked pretzels with pub mustard for the table to share.

I’m not the beer aficionado of our household so I order a mimosa. It’s Saturday after all, so I’ll call this brunch. The baked pretzel isn’t as good as I remember us having enjoyed in the past; maybe it’s stale? It’s pretty tough and chewy. I haven’t found anything mustard doesn’t improve upon and end up dunking pieces of the pretzel into SBC’s incredibly hot and spicy house mustard.

The menu’s got a little bit of everything from salads to burgers to entrees. They offer pizzas, but sadly only on Mondays. Booooo! I contemplate a big salad (the Fruit & Nut sounds amazing) or their two vegetarian sandwiches, when I spy the Fish & Chips made with SBC’s own brew. I am a sucker for good fish and chips, especially when the fish is hand-battered to order and fries are cut by hand. So much better than the stuff that’s been languishing in the deep freeze.

By now my mimosa has evaporated so I order a cider to go with the fish. Looking back I probably should have ordered the ESB/Amber on tap that’s featured in the batter, but I wanted a tangy cider instead. I like the cider quite a bit. It’s not overly sweet or cloying and is actually dry for a cider. In fact, it's hard to stick with just one.

The basket of fish and chips is generous with large planks of unevenly sized (uniformity equals freezer fish in my book) flaky white pollack in a malty, yeasty batter. The fish is perfectly cooked, still moist and slightly sweet from the caramel notes in the ESB batter. The fries underneath are tasty too, though soggy after sitting under a big ‘ole pile of fried fish. There are worse fates than discovering withered fries and before we even say our goodbyes and head our separate ways, I’m already envisioning a summer lunch with friends on SBC’s patio.