(Las Vegas, NV)Before we flew to Vegas, I was perusing the shows on Vegas.com, hoping to score some sweet tickets for a great show. Lo and behold, an offer popped up for Bette Midler at Caeser's Palace, with a preceding dinner at your choice of Mesa Grill, Bradley Ogden or RAO's.

We've eaten at Bobby Flay's Mesa Grill once before and we'd had our fill of Italian food lately, so the logical choice was Bradley Ogden.

Not really knowing much about the restaurant, we showed up early for our prix fixe menu...


He Fed:
After Juliet cleaned up at the Rio poker tables (she split first place and chopped the prize money when the 2 hour game was running close to 3.5 hours), we excitedly taxi'd over to Caeser's Palace to pick up tickets for the Bette Midler show at will call. Dinner was still an hour away, and we were pumped up with adrenaline, so we headed to Mesa Grill's bar for a drink. I selected the grapefruity Bitter Frenchie (which was so good I ordered another round) while Juliet enjoyed a dirty martini. Finally, pleasantly warmed from the inside, we were ready to head to dinner. 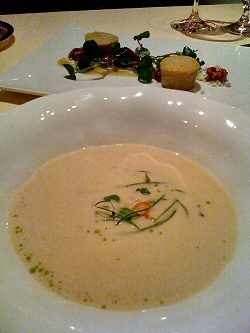 Garlic Soup and Blue Cheese Souffle
We were greeted by friendly staff and given the option to seat immediately or enjoy a cocktail first. I wanted another drink, so we clambered onto tall padded chairs at the heavy wooden bar. Everything around us receded in quiet, well-appointed wood furnishings and subdued artwork of shorelines. It felt oddly like home. (We learned later that Bradley Ogden was born in Traverse City, Michigan.) Feeling a bit adventurous, I ordered The Kip, the bartender's own concoction of Hanger One Chipotle vodka, Chartreuse, sweet and sour, ginger ale and pepperocini. Some people might shy away from all that heat, and I might too in drink form, but I was so glad I didn't. It was the best cocktail I've ever had! Sweet, spicy and way too drinkable. I realized I would need some food soon to sop up all the liquor, or I'd be snoring through Bette's show.

We were shown to a nice table in the atrium toward the front along, presumably, with all the other show-goers who were enjoying the fixed menu. Now, ordinarily I'm more than a bit wary of prix fixe menus that aren't chef's menus. An image conjurs in your mind, row upon row of the same filet mignon stacked up on the counters in the kitchen under heat lamps. That's how they made their money, right? Charge you $80 for a meal and then deliver $40 worth of food? All my fears would soon be shattered.

Our waiter was more of a conductor, dressed in suit and tie, waving over the water boy and checking in with us, voice low and congenial but ever aware of our schedule and efficient as any Swiss timepiece. He brought us champagne to start, along with a delightfully crisp amuse-bouche of granny smith apple cubes and bacon. Bacon? Apples? Sounds like Michigan to us! Then our first course arrived: twice baked Maytag blue cheese souffle for Juliet and creamy garlic soup for me. The first spoonful slid down like silky melted butter, coating my tongue in rich garlic with a hint of mint and olive oil. Fantastic! Although we had promised to share the courses, I was very reluctant to give up the other half of the soup. The souffle was very good as well, though totally eclipsed by the garlic soup. 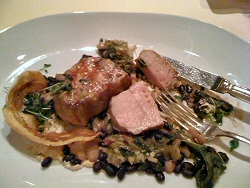 Duroc Pork Loin
With the main courses, we asked the concierge (he was too professional to be deemed just a waiter, in my book) to pair a wine right around the $100 mark. I've found it is much better to just come right out and tell your server what price point you're willing to spend. Oftimes they appreciate the forthrightness and sometimes will even upgrade you a bit for free. He chose a lovely Pinot Noir (my fave!) that would match both dishes: the Duroc pork loin for me, and the roasted sturgeon for Juliet. It was, of course, a perfect match. The only gaff of the evening was when he refilled my glass later and trickled some red wine onto my iPhone (no damage at all, just a minor soaking).

The pork loin was a revelation. Sweet, thick, juicy and perfectly cooked just past the medium-rare stage, still pink in the middle, over black beans, rice and greens, with a crispy plantain slice over the top. Jamaica via Northern Michigan sensibilities. Absolutely fantastic, and made me so glad I would not have to share more than a bite with the wife. She gave me a bite of her sturgeon, which was very nice too...not very fishy, with a crunchy, crispy exterior and bacon aftertaste.

Dessert followed. I ordered the bananas foster carrot cake, which definitely put the cap on the evening, dressed in thick fudge and accompanied by rich vanilla ice cream. To be honest, I remember it being very good but I was still in the throes of ecstasy from the pork. It might have been a Twix bar and a raw banana, and I might not have noticed that much. Juliet had some kind of parfait-looking dessert that made her ooh and ahh; I was past caring what she might be eating over on that side of the table. I was busy basking in the glow of a near-perfect meal...a meal that seemed dubious but turned out to be the best meal we had in Vegas this trip. Indeed, it ranks up there with one of the best meals I've ever had! There is no doubt, the next time we're in Sin City, Bradley Ogden will be on our menu.

She Fed:
My expectations for dinner were low. With most "dinner 'n show" packages, the meal falls somewhere between airline food and a banquet at a convention. I was thrilled to be dead wrong.

Once we picked up our show tickets, we stopped for a cocktail at Mesa Grill where Jeremy ordered something with grapefruit flavored vodka and I had a dirty martini with extra olives. There was time for a second drink and as good as the martini was, I just knew a second one would be a mistake so I switched to club soda.

Which was probably just as well as we ended up having a cocktail at the bar at Bradley Ogden before we were seated for dinner. Jeremy had some sort of spicy martini with a pepperocini garnish and I ordered a drink with peach ale, pear nectar and nutmeg dusted on top. It sounded great on the menu, but wasn't as good as I imagined; the nutmeg was off-putting for some reason.

The restaurant was beautiful with lots of warm wood, natural stone and photos of lakefronts and water. At first we thought it was influenced by the Pacific Northwest, but later read that Ogden was from Traverse City, Michigan which sort of made us feel at home. 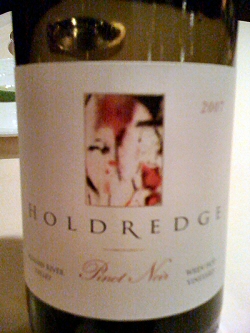 2007 Holdredge Pinot Noir
We were seated in a smaller room with a large water feature that wrapped around three sides of the room and provided a peaceful, soothing ambiance. I could tell immediately we were in for a treat.

Along with several other tables in the room, we had selected the pre-show "prix fixe" menu and had three choices for appetizer, entree and dessert. We talked with our waiter (probably the first time I've seen a waiter in a custom Armani suit) about whether we should do wine by the glass or try to find a bottle that would work with our choices. He was warm but not overly friendly or fake and he conveyed great confidence; you just knew this guy was going get us a good bottle within our price range.

We started with a glass of sparkling wine and decided to share our appetizers of blue cheese souffle and cream of garlic soup. (With garlic you kind of have to share, right?) The souffle was like a mini muffin and garnished with dried cherries and field greens. It wasn't easy setting aside half for Jeremy, I could have inhaled it all!

The garlic soup was intense, soothing and decadent - probably just as hard for Jeremy to share as well. The champagne was the perfect accompaniment to both and I was beginning to regret not spending more time researching Chef Ogden before we arrived.

Our waiter selected a Holdredge pinot noir to pair with my sturgeon and Jeremy's pork loin. I'm not the biggest pinot fan and find many of them to be one dimensional and thin. However, this pinot was amazing and I hope we can find some in Michigan so we can load up the wine cellar with a case. I enjoyed this one so much that I kept the cork as a memento. The wine steward explained that Mr. Holdredge is a lawyer by trade and bought a vineyard as a hobby. (Note to self: time to consider upgrading hobbies from writing and cooking to vineyard ownership. Yowza!) In any case, the pinot was a lovely pairing for Jeremy's pork and my fish.

The sturgeon was roasted and had a deep golden crust with a white flaky interior. It was firm, smokey and reminded me a little bit of pork actually. Jeremy had a bite and enjoyed it too. The sturgeon was placed on a bed of cubed celery root and fennel. Clean, fresh and yum! 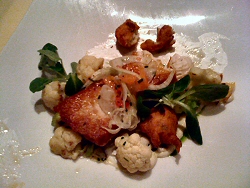 Roasted Sturgeon
Jeremy had pork with rice and black beans and a cute little plantain garnish. I am sure he gave me a bite and I am sure it was delish, but I only remember how much I was grooving on my fish and veggies.

There were three choices for dessert: a sampling of ice creams, a bananas foster cake and...a chocolate peanut butter crunch parfait with peanut brittle topping. Like there's even a question what I was going to order. I knew before we left for Vegas I was going to hit that peanut butter chocolate dessert. It was as good as I had hoped.

What's interesting is that our expectations for this dinner were the lowest and it was the best dinner we had during this trip. The service was top-notch, the atmosphere was welcoming and the food was just amazing. I really appreciated that while the servers were mindful we had a 7:30 pm curtain time, the service never felt rushed. I have a feeling we will be seeking out one of Chef Ogden's restaurants when we are in Northern California this coming May.