(Grand Rapids, MI) Back home in Grand Rapids from a long Vegas trip, we decided to stick around town for this Saturday's culinary adventure. We take turns each weekend choosing a venue and Juliet decided to try Wild Fire Grill. The only problem was, it had been renamed Rock Fire Grille as of January 1st, 2010. And this is a restaurant that was once named Naya, so the multiple name changes gave us a shudder of fear. Why had they changed the name? Was it a licensing issue (there is a chain of Wild Fire Grilles) or something a bit more sinister? Together, with John and Rachel as our unsuspecting dinner companions, we braved the brisk January winter in search of sustenance...


He Fed:
Let's get this out of the way right now: I didn't expect much from Rock Fire Grille, and that's exactly what I got...not much. For one thing, the redesignation from Naya to Wild Fire Grille to its current incarnation, is a worrisome issue. It smacks of poor management and/or financial problems. Secondly, it's located within shouting distance of Bone Fish Grill, a much better chain that serves almost exactly the same kind of menu at almost the same prices. We are mystified as to why Rock Fire would decide to specialize in mostly seafood, when there is another seafood-centric restaurant literally a walk away? Perhaps they are satisfied with garnering Bone Fish's leftover patrons (those who don't want to wait around to get a table). 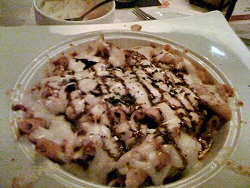 Baked Penne Pasta
We arrived early and decided to enjoy a drink at the bar while we waited for our dinner companions. The bartender was too loud and somewhat obnoxious, and clearly did not know what she was doing (she had to be coached which draught tap was which, even though they are clearly marked). Juliet ordered her usual dirty martini and I decided to start with a beer. Even though there were eight taps, none were too unusual; I went with a Leffe. It was served in a normal pint glass, not the Leffe glass into which it should have been poured, and the head was a tad foamy. As I drank, the foam coated the walls of the glass, indicating dirty lines.

John and Rachel joined a few minutes later and we conversed for a bit before being shown to our table. Ordinarily I am against being seated at a high-top (much prefer a booth) but these had chairs with decent foot rests and the surface area facilitated sharing and low conversation. However, one of my pet peeves is when the host/ess seats you right next to other diners when the dining room is completely open. I know they are trying to make it easier for their servers, but I don't care. I want to be comfortable and banging my chair up against someone else's is not comfortable. No one else seemed to mind too much, so I kept my peace.

Our waiter arrived to take our initial drink orders and recommend some appetizers to start. Rachel and I wanted to try the mussels and we all agreed on the Rock Fire Shrimp as well. I had my first oyster at the Oyster Bar in Planet Hollywood's Miracle Mile (formerly Alladin's Desert Passage) and was pretty impressed, so I thought I should try the mussels too. They arrived steamed open, floating in a red curry coconut broth. Juliet offered a bit of bread sopping in the broth juices, and it wasn't bad, though a kind of foreign, musky taste. I took out a mussel and put it on my plate, then took a big whiff. Phew! It took me five seconds to assimilate what the smell remind me of: the sharp sting of pee in the air of a nursing home. Pungent, hot and reeking of ammonia, the mussel was not at all enticing. Despite the odor, I decided I had to go through with it. I dug out the slippery tissue from the shell, put off by the discoloration of the meat, then popped it into my mouth. Chewed. Tried not to gag as the soft suppleness gave way to a gritty, foul-tasting lump that sat on my tongue. With much effort, I swallowed and put down my fork. My first and last mussel.

The shrimp was much better: small curls deep-fried then slathered in buffalo hot sauce, sprinkled generously with crumble of blue cheese, and accompanying ranch dressing for dipping. Unfortunately the shrimp were so small, none of the taste came through. It could have been anything inside, or nothing at all. The hot sauce overpowered everything. No subtlety in the dish at all.

Disappointed, we forged ahead. I ordered a baked penne pasta dish with spicy Italian sausage while Juliet got the pretzel-encrusted walleye. The waiter, who was trying a little too hard to please and not exactly a sommelier, recommended a Napa Cellars Cabernet Sauvignon to pair with the pasta. When my dinner arrived, my hopes were renewed. The penne swam in thick, spicy tomato sauce with chunks of sausage, under a blanket of mozzerella and balsamic vinegar, perfectly crisped on top from the broiler. It looked and smelled amazing. I dug in and took my first bite... Good, but not great. Again, very heavy-handed, with no subtle flavor profiles. I probably could have gotten similar taste out of something at Applebee's. Half-heartedly, I ate about 3/4 of it then gave up, bored.

Nobody was in the mood for dessert, so we ordered a bottle of Chilean Super Cab (again, not great but decent) and just talked. In the end, Rock Fire Grille exhibits all of the flaws you'd expect from a mediocre restaurant that's gone through three name changes. The personnel seems to be struggling with their roles (the water boy showed up halfway through our meal and wanted to refill my empty beer glass with water) and the dishes show very little originality. That seems to be the trend around these parts, where some restaurants do not truly respect their clientele and those in the service industry seem out of place...desperate even. Sadly, this will be our one and only visit to Rock Fire Grille. Maybe if they change the name again, change the menu again, and change the chef (again?), we'll reconsider.
She Fed:
I had heard good things about Wild Fire Grille over the last few months and thought it would be a good one to try. When Jeremy discovered they changed their name to Rock Fire Grille, I chalked it up to some kind of trademark snafu given that there's a chain of buffet restaurants named Wood Fire Grill.

We arrived a few minutes after 6pm on a Saturday night to a near-empty lot. In fact, it was kind of funny that they had a sign out front advertising "free valet parking" when there was no shortage of nearby parking spots. The hostess greeted us and explained we could be seated immediately even though we were more than 20 minutes early for our reservation. We decided to belly up to the bar and wait for John and Rachel.

The bartender was very cheerful and eager to please. She made a great dry martini for me and Jeremy had a beer on tap. I was surprised to see their menu was so fish and seafood heavy. With Bone Fish Grill so close I would have thought Rock Fire would go another direction. But I love fish, so it was a pleasant surprise.

John and Rachel arrived and joined us at the bar. We chatted past our 6:30 pm reservation time, but that was obviously not an issue in such an empty restaurant. The hostess seated us in the bar area, which I thought was weird since they have a full dining room on the other side of the building. But the bar area wasn't noisy and it was non-smoking, so I didn't gripe.

Like Jeremy, I hate when a restaurant seats patrons right next to each other. There were three occupied tables in the whole bar and they had to sit us right next to two of them? I am sure there is some industry-inside reason for doing this, but as a customer, I hate it.

After our waiter brought our drink order over, we asked him about the menu and in stereotypical fashion he pointed out the priciest entrees as his favorites. And he flat out dissed the pizza section saying "you can get any of that at Pizza Hut". Now usually I appreciate when a waiter steers you away from something on his menu. So much more believeable than "Oh everything here is great." But I did find it hard to believe I could get the lobster asiago pizza that was on the Rock Fire menu at Pizza Hut. Of course, Jeremy pointed out later that the pizzas are the least expensive items on the menu. Was that what made the waiter steer us away from pizzas?

We ordered two appetizers to start: red curry Thai mussels and Rock Fire shrimp, which were like buffalo shrimp. I was excited Jeremy was going to try mussels for the first time and the thought of red curry broth to dip my bread in sounded great. When the mussels came, there was a definite curry odor, but also an astringent odor as well. I was mid-bite when Jeremy called out, "These smell like nursing home." Indeed, he was right, the mussels had a strong ammonia odor. The broth was great, but I was off the mussels after two.

The shrimp were fine, but seemed more like balls of fried dough in hot sauce. The shrimp were lost in translation; it could have just been buffalo fritters and we never would have noticed a difference. 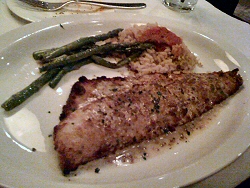 Pretzel Crusted Walleye
I decided on the pretzel-crusted whitefish which came with asparagus and rice. The whitefish was fine. White, mild and flaky. The crust was light, but there was no noticeable pretzel taste to it. The rice tasted like I remember instant rice or "boil in the bag" rice tasting like when I first started cooking back in college. And the asparagus lingered very sadly on the plate, slightly overcooked. Nothing was terribly wrong with the dish, but nothing was amazing. I ate the asparagus because I needed a veggie even if it was a sorry excuse for one and I finished my fish because I was hungry. The rice wasn't worth the time.

Rachel had ordered the shrimp pad Thai and I was shocked when her plate came out. The entire dish was white with the exception of two lime wedges. Since her plate was also white, it was not remotely appealing looking. She gave me a taste however, as it was pretty good and had much more flavor than it appeared. More sweet than spicy, but good. You'd think the kitchen would have garnished it with green onions and chopped peanuts at least to give it some color.

John reported his wasabi tuna steak was overcooked and Jeremy found his sausage penne to be be bland. We decided to skip dessert and share a bottle of wine, which turned out to be so-so.

The restaurant did get busier as the night wore on, but I will never understand why. The waitstaff was stilted and awkward; trying to build rapport with our waiter was like pulling teeth. The food was mediocre and the wine was unremarkable. I've had better dining experiences at airport restaurants. Thankfully John and Rachel were there so the conversation was lively and fun as always. I can't think of a single reason to ever go back to Rock Fire Grille again though.
Labels: dinner fusion grand rapids michigan