(Las Vegas, NV) Originally we had planned our regular Saturday night HeFedSheFed.com outing at a nearby Thai restaurant called Lotus of Siam. Thanks to a busy signal and then a day-of "booked up" proclamation, we had to scurry for other plans. Juliet had just been to Jean Georges' new restaurant at Aria a few nights before and had seen Julian Serrano's new place there as well. We both love tapas and Spanish food seemed to fill a niche in our adventure schedule this time in Vegas. With thoughts of blue cheese fritters and serrano ham dancing in our heads, we caught a cab to Aria...


He Fed:
Thanks to a few too many afternoon cocktails, a fantastic lunch at Pinot Brasserie and a failed poker tourney at Caeser's, I wasn't really looking forward to dinner at Julian Serrano with the usual gusto. Sure, tapas sounded pretty good but all the cab rides and bright lights and smoky casinos had gone to work on me. I craved a quiet meal. I was also out of luck. 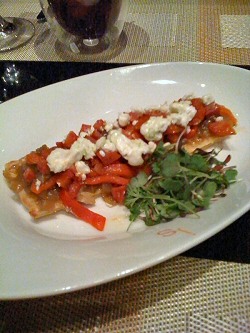 Coco Chorizo
Although Aria is an expansive, airy reprieve from the usual monolithic Vegas property, Julian Serrano is a bustling, loud and intimidating place to dine. We are shown immediately to a small table where I sit on the booth seat, facing away from the main restaurant to a 30' mirror-backed wall of glass shelves upon which sit glass decanters and wine glasses. Juliet sits in a chair facing me and the rest of the restaurant.

People are everywhere, talking loudly. Due to my many years of listening to Pink Floyd, Judas Priest and Genesis with headphones cranked, I have a rough time focusing on a conversation amid the rambling voices in a crowded space. It is hell, almost immediately. I can tell Juliet is unhappy with the volume as well, and this is a prime example of how one aspect of a dining experience can tip the scales for the whole evening.

Somehow we pantomime that we will start with a pitcher of their homemade Sangria, which is absolutely the best I've ever had. Deep, sweet red wine with chunks of apple, peach and orange floating in the thick mixture. It nearly makes up for the noise...nearly. We then communicate to each other via hand gestures and baboon-like grunts what we should order. It is frustrating to negotiate, and soon Juliet gives in to mostly my decisions. The waiter breezes in, demands our choices, then departs in a hurry. 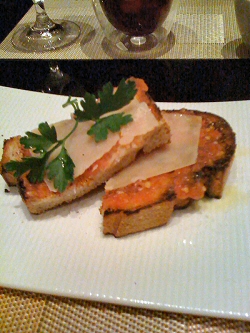 Pan Manchego
What follows is a rushed parade of 5 small plates, each clunked onto our table with graceless, uncaring attitude by some random server who had been tasked to feed us. Our first is a beet salad, which is tasty and tart, with just the right amount of earthiness. In the end, though, it's just a salad...nothing extraordinary.

Next comes a long plate of coco chorizo, which appears to be a rectangular puff pastry slathered with balsamic onions and red peppers. Where is the sausage? No idea. I don't taste any, but Juliet points out the little red cubes on her half that blend in with the peppers. I feel like I got a raw deal, despite the great taste of the pastry. We slug down more sangria.

Following these two relative disappointments -- not bad, not great -- are the wrinkled potatoes. They are little fingerlings that have been salted, buttered and broiled slightly so they are wrinkly and soft, accompanied with a spicy dipping sauce that tastes suspiciously like doctored Cholula (my favorite hot sauce). Awesome! There are quite a few of the little dippers and they last me the rest of the meal. Our most anticipated choice, the pan manchego, is underwhelming to look at but pretty tasty, nonethless. A thin, nearly-transparent slice of manchego cheese laid atop a lightly toasted square of bread slathered in tomato sauce. Simple, tasty and relatively plain. More sangria.

Finally, we end with the chicken croquettes. They are four little egg-shaped globular creations of pureed and whipped chicken meat deep fried in a light, crisp coating. Juliet did not enjoy the sensation of biting into the shell to find a perfectly filled interior of what appeared to be hot cat food, but I liked it. If the temperature hadn't been perfect, I might have blanched at the texture (like frothy pate), but otherwise I scarfed it down, no problem.

No dessert for us, unfortunately. The loud noise, the whirling waiters, and the questionable cuisine conspired against us. I eschewed even my routine double espresso nightcapper; instead, we glugged down the last of the sangria, paid the bill (surprisingly not too expensive) and got out of the restaurant, out of the hotel, and back to our quiet room.
She Fed:
In my opinion, dinner at a tapas restaurant should be a convivial experience. It should be welcoming and warm, conducive to sharing small plates and big pitchers of sangria as well as artful conversation. We have a lovely tapas restaurant in our neighborhood back home and you always know you’re in for great fun and a solid meal. There’s something about eating from the same dish that generates conversation and some hearty laughs along the way. Our dinner at Serrano was neither warm nor welcoming and was, in fact, one of the worst dining experiences I have ever had in Vegas. (And I’m including the time I found a penny at the bottom of my chopped salad years ago at the cafe at Bally’s. True story.)

Serrano is located at the Aria hotel and casino within Vegas’ new City Centre and is helmed by Julian Serrano, formerly of Picasso (Bellagio) fame. We were delighted to find a tapas restaurant in Vegas and I was thrilled to be able to show Jeremy the Aria, as I found it to be airy and light with beautiful architecture and stock full of exquisite art during an earlier visit. (I had dinner at Jean Georges new steakhouse a few nights prior and our group spent about an hour walking through the building which is rumored to have $30 million worth of art within.) With all the buzz around Chef Serrano’s new restaurant, the Aria art collection and the City Centre, I will admit my expectations were high. It also didn’t hurt that my dining experience at Jean Georges was almost flawless with perfect service, staggeringly good wine and the best filet I have ever eaten. 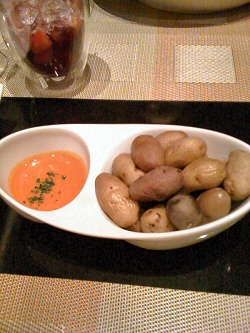 Wrinkled Potatoes
That was not the case at Serrano. The acoustics were absolutely terrible and once seated, we realized that not only could we not hear each other talk, but we could barely hear our waiter. The noise level was similar to being smack dab in the middle of a raucous casino floor. I had hoped for a fun and leisurely dinner where we could share AND DISCUSS our food, instead it turned into the Bataan Death March of small plates. The servers dropped our food at the table, sometimes announcing what it was and then fleeing; there was no explanation of the ingredients or side sauces. It seemed as though they were intent on turning tables quickly.

The sangria was the highlight of the evening; if I couldn’t enjoy a nice meal with my husband I figured I might as well get a little bit lit so I drank up. There were small chunks of apple, orange and strawberry in the sangria and in the ice cubes as well. They did not skimp on the brandy and when I told our server how much I liked the sangria, he explained that the sommelier made it himself each night for the following day. Nice touch.

But the small plates were a mixed bag. The one dish I chose was the beet salad and it was my fave of the evening. Cubes of roasted red and yellow beets were mixed with bits of lime and some sort of tangy gelee cubes in a light sauce. The “wrinkled potatoes” were boiled tiny fingerlings and purple potatoes with a side of mojo sauce that was burning hot. One of the purple potatoes was still raw. Ugh. The “coco chorizo” was a piece of puff pastry topped with tiny cubes of chorizo, slivers of piquillo pepper and dabs of goat cheese. I liked it much more than Jeremy did. The “pan manchego” consisted of hearty toast slices rubbed with raw tomato and topped with a translucent slice of manchego. For $10, I think the cheese could have at least been opaque! The chicken croquettes were my least favorite, but I should note (Jeremy – take note too please) that I’m not a big fan of meat that’s pureed, shaped into a log and then fried. The inside always reminds me of a cat food smoothie. No thanks. 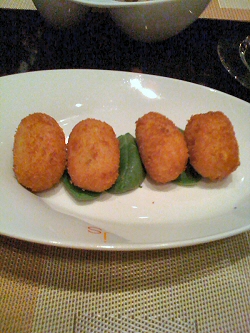 Chicken Croquettes
The décor was lovely and I would have lingered a bit longer and looked around after dinner, but the atmosphere was so loud and overbearing that I could not wait to get out of the restaurant. In fact, I found the meal to be so stressful and so fast-paced that I actually became ill and called it a night at the end of our dinner. There was no strolling around checking out the art. I needed some ginger ale and pepto.
Labels: dinner las vegas nevada small plates spanish tapas