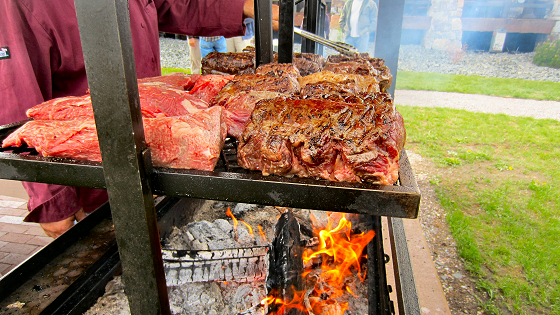 (Greenough, MT) — Saturday dawns bright and early on the first full day of the Montana Master Grillers event. Outside our palatial accommodations, birds are chirping, chipmunks scramble on the porch, and not too far away a herd of Black Angus mosey through the fields, munching grass and occasionally lowing to one of their nearby cousins. Must be time to get up and get moving! Our plan after breakfast is to attend BBQ Boot Camp run by Chef Frank Ostini behind the restaurant/bar area on the Paws Up resort grounds. But, first, breakfast...

Despite some debauchery in the Bull Barn the previous evening during and after the Best Burger bash, I’m feeling pretty good this morning. Our master suite in the house is about half the size of our home, with some nicer amenities. Seems almost a shame to leave. Still, we need a little sustenance before boot camp so hop in the Kia Soul (provided us to get around the sprawling resort grounds), and drive to the restaurant.

I have fantasies of eggs Benedict and homemade blueberry waffles drifting through my mind as we walk up. Instead, we’re offered a fairly typical breakfast buffet. Ugh. I make do with a bagel and begin to dread what other meals might turn out to be.

Out back of the restaurant—actually one long building that houses the bar, a standard restaurant, the shared kitchen, a nicer restaurant, and some offices—the grounds have been set up with little open air shacks under which some Jenn-Air cooktops have been assembled. There’s a big stage erected behind this area, acting as a gateway to the open fields beyond. This will be the eventual space for Sunday night’s County Fair BBQ, clearly.

Famous chef Frank Ostini of The Hitching Post near Santa Barbara, CA (featured in the movie Sideways) is already under one of the shacks, stoking his grills into roaring flame. While he tosses on zucchini, red peppers, onions, jalapenos, and potatoes (and, later, some eggplant that was missing), he regales the small group of attendees with stories of his restaurant, the enduring influence of its movie appearance, and the operation of the Santa Maria grills. The way he raises and lowers the grates is kind of like a ballet of science.

With the vegetables out of the way, the meat goes on: glorious cuts of Wagyu tri-tip and sirloin provided by Snake River Farms. I’m awed by his expert handling of the beef and spot-on timing when it comes time to flip or rotate. If it were me, I probably would have scorched the meat and what a shame that would be! Somehow, we spend over an hour watching Ostini do his thing until the grilling part is nearly done. He bids us adieu until lunchtime.

Juliet and I wander around, exploring the grounds, until it’s time to eat. A long table has been set out in the glorious sunshine, heavily laden with big bowls of salad, pasta, and grilled vegetables tossed in olive oil. Chef cuts generous slabs of both sirloin and tri-tip for each guest, perfectly medium rare. He’s also done some grilled shrimp lightly spiced. Everything is succulent and savory. It is, by far, the best preparation of Wagyu I’ve ever had and perhaps the best beef I’ve ever eaten.

To wash it all down, three kinds of rosé wine are offered, including Ostini’s own brand. Whatever bad taste the breakfast buffet wrought, all is instantly eclipsed by the magnificent splendor of this noon repast. Through half-lidded eyes heavy with pleasure and fullness, we gaze out onto the ranges and the grazing cattle in the distance. Finally, reluctantly, we abandon our comfortable positions in the sunshine and wander back to the Bull Barn where our Bourbon and Country Ham seminar is about to begin.