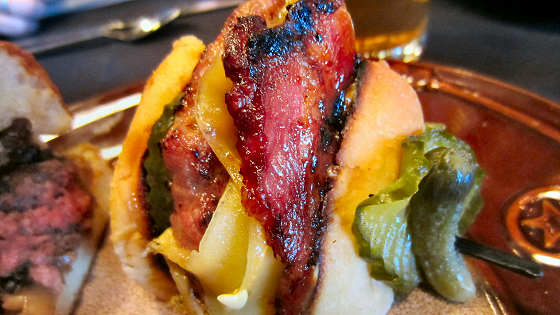 (Greenough, MT) — Sometimes our travels take us to the most unlikely places, destinations we would never have ordinarily chosen. But when opportunities arise, we error on the side of new experiences rather than personal preference. So we found ourselves in Greenough, Montana at the 2nd annual Montana Master Grillers event at the Paws Up resort. Cowboys? Check. Cattle? Check. Country music? Check. After our complimentary tour of the resort and some time to unwind, we proceed to the “Building of the Best Burger” competition...

There’s a saying here in Michigan: “If you don’t like the weather, wait fifteen minutes.” Come to find out, that saying is applicable almost anywhere and Montana is no exception. Though, with the wide open prairies and mountainous region, that fifteen minutes seems more like five. Outside the Bull Barn (literally, a barn converted to a dining hall, demo space, and marketplace), three chefs and their crew struggle against a sudden bout of vicious wind and spackling rain. They attempt to keep their grills stoked and all give up on the hope of a canopy that won’t blow away in the breeze. Proudly, bravely, they tend their fires in the open air.

We sidle up to a propane heating tower. It’s been a warm, sunny day and this squall comes out of nowhere. I admire the streaking dark clouds overhead; you cannot help but marvel at the immense power of Nature out here. Even as Juliet breaks away to find shelter, I gravitate toward the cooking stations. Hell, if the chefs can stand a little moisture, so can I!

Just as I meander toward the middle station, Chef Adam Sappington beckons me forward. “Hungry?” He indicates a plate upon which has been quartered his Grilled American Lamb Burger. I nod in thanks and grab a section. No one else is nearby; I am alone with the rain, the beef, and the man who made it. I bite in. The burger is juicy—really surprising, since I expected it to be dry lamb—with a tangy mint slaw, some redolent melted havarti, and peppery arugula. The star of the show, however, is the smoked tomato jam. I swear...at that very moment the rain ceases, the sun returns, and somewhere an angel gets its wings. My taste buds sing and I mumble in ecstasy, “Oh my god...that is fantastic, chef.” He smiles and thanks me, sweetly humble.

Now that the weather has moved on, people begin to swarm the stations. Juliet rejoins me. We move along to famous Chef Frank Ostini (of Sideways fame) and his Hitching Post Oak Grilled Bacon Burger. He uses a special Santa Maria grill, which raises and lowers. Unfortunately, the contraption could not combat the vagaries of the environment; the Snake River Wagyu beef, topped with house cured bacon, bacon jam, and caramelized onion on a brioche roll is woefully overdone. It is all the more heartbreaking since I can taste the promise of what it should have been.

Adjryche Channing and the Paws Up culinary team give Sappington a run for his money with their complicated Memphis Style BBQ Pig Burger. It’s a towering patty of ground pork topped with cottage bacon, mustard, pickles, smoked onion, and smoked gouda on sweetly delicious homemade potato rolls. I’m not a devotee of over-produced burgers but this one is just plain fun and tastes incredible, with bold layers of juicy pork, crunchy bacon, and ever-present smoke. Channing and his crew yuck it up, enjoying this chance to compete against two other great chefs. This sense of playfulness clearly comes through in the cooking.

Sappington goes on to win the competition, rightfully so. We retire to the Bull Barn for a few more bites, just to make sure we chose wisely. We did. Montana beer and wine flows freely, so we endure the country tunes until it’s too much and we retire. Tomorrow is a full day of more demos, seminars, and great food.

The weather’s being temperamental tonight; one second it’s sprinkling, then the sun peeks out from behind a cloud, then the wind gusts and fat raindrops tumble from the clouds. The cycle continues off and on for the better part of an hour. Jeremy isn’t about to let a little liquid sunshine ruin his dinner. He grabs a lamb burger quarter early on, in the rain even. I am about to join him when it starts coming down heavier and I decide to hightail it back to the barn...closer to the bar.

The chefs have been holding off on finishing the burgers en masse until the weather improves but finally they cave and start quartering and plating the burgers. As if on cue, the sun appears and the rain abates for a bit, allowing us all to grab some burgers and pick our favorite.

At Jeremy’s urging, I start with the lamb burger by Chef Adam Sappington of The Country Cat in Portland, OR. It’s perfectly cooked and topped with a thin layer of ooey, gooey havarti, one of my all-time favorite cheeses. There’s some sweetness from a schmear of smoked tomato jam and a nice kick from the arugula mint slaw. I’m getting some tang from the slaw as well and think there might be a bit of yogurt binding it. I can see why Jeremy’s been raving about this one. The lamb is flavorful but not overbearing or gamey. The jam, cheese, and slaw all add such depth of flavor. This one will be hard to beat.

We next visit the grill being manned by Chef Frank Ostini of The Hitching Post. We had the pleasure of talking with Chef Ostini earlier in the day and learned a bit about the Santa Maria grills he brought in for everyone to cook on tonight. He’s a character and extremely likeable. His burger is Snake River Farms Wagyu beef, house cured bacon, caramelized onions, and bacon jam all piled on a brioche bun. I’ve had fabulous Snake River Farms beef before so my hopes are high for this burger. The portion I get is overcooked, however. The beef is chewy, with little flavor or juice left. The extra thick bacon, brioche, jam, and onions are all wonderful, but they can’t mask the rubbery overcooked beef.

Finally, we hit the Memphis Style BBQ Pig Burger by the Chef de Cuisine at Paws Up, Adjryche Channing. The burger is described as ground pork and cottage bacon, with smoked onion, smoked gouda, mustard, and pickles on a homemade potato roll. The pork and bacon make for a divine burger patty. It’s juicy and incredibly flavorful, such a relief after the previous burger. The smoked onions and cheese aren’t shabby either, but for me it’s the potato roll that makes it. This tastes like so many homemade rolls I’ve had in the Midwest, truly authentic. At this point it’s a toss up between this and the lamb burger.

I don’t want to give up on the Snake River Farms beef though. So we grab one more quarter from each chef, cut them in half, and try one more taste of each. This time around the beef burger is cooked closer to medium, making for a juicier, tastier burger. Tough decision ahead!

We debate it a bit between ourselves and even a few other guests, though we all seem to be in agreement. The next night at dinner the crowd cheers when Chef Adam Sappington’s lamb burger is crowned the winner.