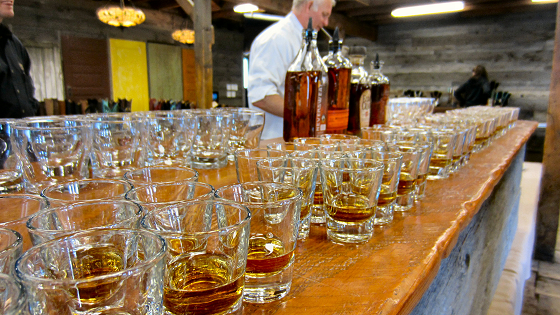 (Greenough, MT) — It's Saturday afternoon, the second day of our adventure at Paws Up resort in Montana, and already we're overwhelmed with the extravagant offerings during our lunch. If this had been any other vacation, we'd probably be sleeping it off back at our chalet. But, while other guests are busy participating in various outdoor activities like skeet shooting, archery, white water rafting, and rappelling down sheer cliff faces, we've opted for a more sedate experience in the Bull Barn, learning about bourbon and ham...

To say we are relaxed is an understatement, having just enjoyed a gourmet lunch paired with fabulous rosés from around the globe. We’re lounging in the sun on a spacious deck with views of grazing Black Angus framed by snow-capped mountains. The prospect of getting out of our comfy chairs to attend a bourbon and ham seminar is more of an intrusion than an opportunity. Who has room for either ham or bourbon, I wonder aloud? Still, we came here to learn so we head back to the Bull Barn just as the seminar begins.

Paws Up Food & Beverage Director Kevin Kapalka talks through three different hams, all from Benton’s Smoky Mountain Country Hams in Tennessee, aged 12, 18 and 24 months. He slices tasting portions for the group and piles them on serving plates. The knife moves quickly through the first two hams, but I notice the 24 month ham is more dense and he has to work the blade through the meat for each slice.

John McKee, co-founder of Headframe Spirits in Butte, gives a brief presentation on bourbon and dispels a few myths. Turns out, not all bourbon is made in Kentucky; it can be distilled anywhere in the United States, which explains how Headframe can manufacture Neversweat bourbon in Butte.

He talks about small batch bourbon versus the major manufacturers and spills the beans on a few of the more popular brands. Watch out Woodford Reserve fans, you’re probably not drinking exactly what you think! There’s a little Old Grand Dad lurking in that tumbler, according to John.

Another myth? The older a bourbon, the better it is. John states there are many younger bourbons out there that can give the older ones a run for their money and at a much more affordable price point. Finally, John assures us we can drink bourbon however we like. It is perfectly acceptable to add ice, a bit of water, or to even use bourbon in a cocktail. (If an Old Fashioned is good enough for Don Draper, then maybe it’s good enough for the rest of us?)

And with that, we are turned loose, quite literally. Everyone is portioned out a shot glass of Neversweat, Bulleit, Elijah Craig, and Jefferson Reserve. Our instructions are to sip each bourbon, in order, then to taste each with a bit of ham.

From the day we signed up for this seminar, I had planned to take one teensey tiny sip of each bourbon and concentrate mostly on the ham. I’m not a big liquor drinker and have never been a fan of darker spirits (bourbon, rum, or whiskey). I’ll enjoy a vodka martini from time to time and I’ve been known to stoically sip a Manhattan when I’m in Manhattan, but otherwise I’m a wine girl. I have absolutely no intention of pounding bourbon this afternoon.

I take a tentative sip of the Neversweat, tasting notes of cola, toffee, hazelnuts, and even hints of pipe tobacco. For straight bourbon, it’s not nearly as bad as I’d imagined. Next up is Bulleit, packed with baking tastes and aromas: vanilla, spice, honey, and praline. It’s actually quite smooth.

One of our new friends (a few sips of bourbon will bond a group of strangers quickly) declares the Elijah Craig her favorite. “It tastes like a caramel candy with honey.” Though I find it slightly woody on the tongue and incredibly boozy to my nose, like the others, I’m enjoying the sipping and tasting nuances much more than I’d expected.

The Jefferson is definitely sippable and I’m getting loads of pecan, maple syrup, toffee, and—dare I say?—milk chocolate on the tongue. This could be dangerous over ice on a lazy Sunday afternoon.

Next, we taste thin slices of each ham with it. I’m not sure if it’s the booze cutting through the fat and salt of the pork or if it’s the other way around, but the lesson is ham and bourbon pair delightfully together. Some folks prefer the younger ham for its silkiness, while I’m all for the 24 month old ham with its assertive flavor and intense crystallization. Yowza! (Which is something I find myself saying out loud after four baby shots of bourbon in the middle of the afternoon.)

Once we’ve depleted our shots and noshed on the hams, we are all invited to order a drink at the bar...any bourbon we want, whether it’s neat, on the rocks, or in a cocktail. Jeremy has an affinity for the Jefferson and jumps at the chance for more. I really like the aroma of Bulleit so I get it on the rocks. We continue to nibble the ham and enjoy a nice conversation with John and his wife Courtney, his partner and co-founder at Headstrong, about how they started the distillery and the overall state of the liquor business. They are both completely approachable and genuine, clearly loving what they do.

I’m enjoying my bourbon (words I never ever thought I’d say) until the last of the ice melts and double YOWZA, the flavor profile turns boozy and medicinal on me. I consider getting more ice for my glass, but decide to cut my losses and move on to ice water. As we toddle out of the barn, I vow to get a good bottle of bourbon for our home bar. Imagine what an incredible conversation starter bourbon from Butte might be?