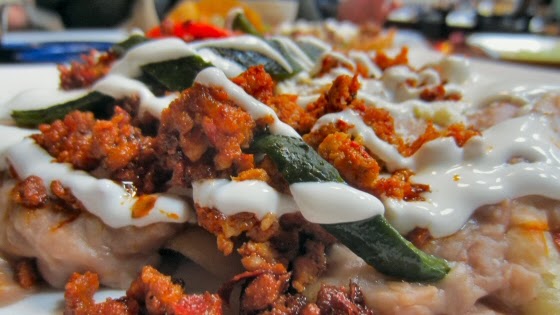 (Mishawaka, IN) — After being cooped up in the house for a couple weeks, we’re getting antsy to go exploring, as we’re wont to do. Not too far away, in Mishawaka, Indiana, is a Whole Foods. We pack up the Prius and head out into the drizzly November morning. Forty five minutes later, we’re rummaging through a small and disappointing version of the monstrous Whole Foods we’ve encountered in Chicago and Austin. Still, dodging other people’s carts while they ponderously deliberate between too many gluten free options, has made us hungry for lunch. We spy a place across the street called Salsa’s Mexican Grill...

My hunger and need for spicy food nearly blinds me to the fabricated exterior. The brick facade, red awnings, and faux adobe walls could be any one of a dozen different chains in the mode of Chevy’s. It doesn’t help that a multitude of other chain restaurants surround the area. I guess it was too much to hope for a farm-to-fork eatery next to Whole Foods?

We go inside and are greeted by a cheerful hostess. The place is huge, with several separate dining spaces and even an upstairs area overlooking a central courtyard with a fountain in the middle. I can imagine this being a hot spot on Saturday nights, with many a tequila shot being downed. Indeed, even at lunch, there are a couple older gentlemen enjoying gigantic margaritas at a table we pass.

Our booth is too tight, but I’m able to jockey the bench and table until we’re both comfortable. Decent corn nacho chips are delivered with a carafe of mild red salsa, a bowl of spicy ranch dressing, and water. The waitress arrives shortly thereafter to inquire about drinks. Unfortunately, they are out of the Jarritos soda that I like so much; I stick with water.

To begin, we get a plate of stuffed jalapenos. They are delivered so quickly, they must have read our minds! The jalapenos have been thoroughly deseeded, stuffed with cream cheese, breaded and deep fried. I detect a weird, acrid tang that is not very pleasant when I bite into one. It almost tastes like something that had been frozen, thawed, then frozen again. The temperature is just above lukewarm. I try a couple more before giving up. I can’t tell if they are made in-house or just ordered from a restaurant supply warehouse.

I’m hopeful the breakfast enchiladas I’ve ordered are better. They’re three soft tortillas stuffed with scrambled eggs, chunks of tomato, and some onion, over which has been poured refried beans, chorizo, strips of chili, and a white sauce. It’s not bad, though the eggs are grey in color (possibly picking up color from spices) and the overall spice level is too mild. I grab one of the hot sauces and liven it up. Still, I lose interest after the halfway mark.

Salsa’s Mexican Grill might be a great place to hang out with friends and suck up some drinks, but I’d be hard pressed to go back. Though the preparation looks authentic, there’s a distinct lack of flavor and quality which puts it on par with Chili’s. My hunger unsated, I’m still on the lookout for a good taco.

We’ve just finished a whirlwind shopping spree at Whole Foods in Mishawaka (if you can call spending $204 on one cart of groceries that contained no alcohol, no coffee, and just enough meat for one meal a spree), and we’re starving. It’s only after we’re wheeling our purchases to the car we spy the small seating area with customers savvier than us munching on wood fired pizza, organic deli items, or sushi for lunch. Blurgh! We opt to strike out and find something nearby.

Google Maps shows chain restaurant after chain restaurant; surely there must be some middle ground between buying $9 worth of holiday grapes at Whole Foods and suffering through lunch at Applebees, right? As we pull out of the parking lot we see Salsa’s Mexican Grill across the street. We both love Mexican food and in my opinion, it’s pretty hard to cock up, so we give it a go.

The interior is exactly what you’d expect in any Mexican eatery near a major shopping area: standard decor throughout the two story interior (you can almost see the mariachi band strolling by on weekends); Mexican music piping through the sound system; patrons sipping ginormous, neon margaritas filled to the brim. Our waitress is prompt and friendly, thoroughly attentive without being overbearing.

I suggest queso fundido, remembering the divine version we had in California at Julia Child’s favorite taco stand, but Jeremy’s not biting. He wants Stuffed Jalapenos, so I oblige. They arrive looking a little...bedraggled. The batter is broken and I wonder aloud if this is a sign these were hand-breaded. One bite tells us these are straight out of the deep freezer, probably delivered by some mass food purveyor. I try them with some of the iceberg and salsa to fancy them up, but they’re barely cooked through...only lukewarm in the center. We abandon the platter.

Our entrees arrive and mine is absolutely lovely. I’ve ordered the Alambre, a deep fried pita topped with pepper, onion, steak, bacon, cotija, and crema. It’s served with pico de gallo which I mound on top of it all. I try to cut it into wedges, much like a Mexican pizza, but the toppings are so plentiful I can’t eat this out of hand, so I cut into smaller pieces. It’s darn good—I had my doubts about the steak but it’s tender and remarkably beefy. The peppers, both red and green, are fresh, tasty, and crisp. I adore good pita and this one is crunchy on the outside, but tender inside. The crema, cotija, and bacon add a plush fatty element. It’s just a really good dish and one that I would order again.

Not that I’ll get the chance. Jeremy’s food is less than stellar. He’s unimpressed and I know Salsa’s will never get a second chance, with him at least. Anyone want hit Whole Foods and have a neon margarita afterwards?