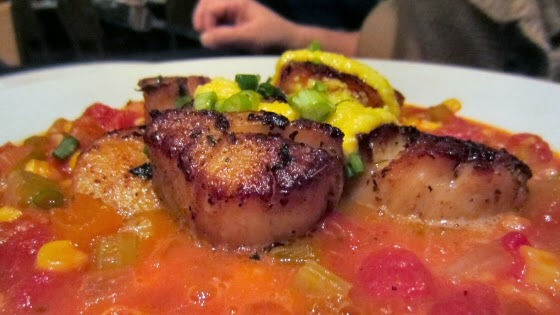 (Benton Harbor, MI) — The days after Halloween, autumn arrives in a whispery rush of dead leaves and premature darkness. Heavy coats come out and we’re in search of warm, cozy interiors. Locals have been recommending The Ideal Place in the arts district of Benton Harbor for quite some time, so we bundle up and slip along silent streets until we reach our destination, just a couple blocks from The Livery. Inside looks warm and inviting...

The Benton Harbor arts district is an oddity. On one hand, you’ve got a great brewery and some excellent restaurants; on the other, there are ramshackle, closed-up ruins of business long gone. It’s a strange feeling, like finding a cache of rubies in a dumpster. You have to admire the determination of those folks who strive to make the city a better place in which to live, and that’s part of the reason we’re having dinner at The Ideal Place.

First thing I notice is how busy it is. This is a Wednesday night, mind you, shortly before 7pm. Occupancy is about 70% and the bar is a hive of activity. Come to find out, Wednesday is also rib night, where you can get a full slab of Asian spiced ribs for $13 (ordinarily $21). They look mighty good, too...glistening and piled high next to a stack of house-cut cajun potato chips. They definitely appear to be worth the Wednesday trip, but I’ve got my sights set on a meatless meal.

After the hostess seats us at a four-top near the back, our waitress arrives to bring water and get drink orders. She’s slightly annoying at first, but warms up near the end of our visit. I’m feeling frisky, so get a pint of the Greenflash Hop Head Red IPA. It’s pretty delicious, particularly since it’s the first beer I’ve had in nearly two weeks. I sip in quiet ecstasy, admiring the wide-ranging, global menu. From Morocco to Italy to Louisiana, it seems the ideal place is every place.

Despite my trying to sweet talk the wife into ordering an app she’ll like—the NOLA BBQ Shrimp or Buffalo & Chorizo Meatballs—she opts for the Vegetable Egg Rolls, in deference to my diet. They arrive, deep fried golden and larger than your everyday, average egg roll. Inside is the standard mix of cabbage, carrot, and other vegetables...but also mushrooms, which are off my list right now. They’re easy to extract, though, so I’m able to enjoy the rolls. In the end, they’re nothing out of the ordinary but satisfying enough, especially on a chilly evening.

For my main, I somehow sidestep the allure of Grilled Chicken with Sriracha-Wasabi Remoulade and instead select the signature dish, Ideal Pasta. Boy, am I ever glad I did! It’s a generous bowl of linguini, proscuitto, peas, and onions (held the mushrooms), tossed in an asiago basil cream sauce. Often, pasta dishes like this tend to be heavy or over-seasoned. Not the Ideal’s version; it’s a lovely, rich tangle of hearty noodles given depth by the herbed cheese and near-translucent onions, a kiss of salt from the meat, and sweet pops of pea. It’s a perfect rendition of a familiar dish, no fuss, no frills, just a great pasta heaped in a West Michigan portion.

Not even sea-salt caramel cheesecake can tempt us to order dessert. I can tell Juliet has throughly enjoyed her Scallop Maque Choux, and we’re both ready to head home.

We’ve been trying to find a favorite eatery here in St. Joseph. We had several gems to choose from when we lived in Grand Rapids. Knowing those were culled over the course of six years, we realize it’s going to take time to find a few treasures in our new digs. Lots of friends have recommended The Ideal Place so we give it a whirl on a cold and windy weeknight.

Finding anything here after twilight is still an adventure for me. Despite working here since 2007, I’ve never actually lived here so not only am I unfamiliar with the surroundings, but I don’t recognize a darn thing once it’s dark out. And now with Daylight Savings Time in full swing, it’s dark before 6 pm! As usual, Jeremy’s GPS saves the day and she guides us to the eatery in her annoyingly authoritative voice.

We are seated promptly and have a quick minute to look over the menu and wine list before our waitress arrives. She’s friendly enough, though slightly unpolished and maybe a bit rushed. Throughout the evening she misses a few things...telling us about the specials, asking if we want drink refills, etc. It’s like she’s not quite at ease yet in her role. Or maybe she’s too at ease?

The vegetarian eggrolls we decide to split arrive almost immediately. They’re cut on the bias and presented with two sauces which our waitress doesn’t describe. Luckily neither of us is shy so we dig right in. Turns out it’s just soy sauce and a slightly doctored up sweet and sour sauce. The veggie filling is tasty and packed with mushrooms. My only complaint is how greasy the eggrolls are. Now I’m not one of those gals who doesn’t expect to see a little sheen on my fried food, —come on, that sheen’s the best part!—but when grease is dripping down my forearm while I’m eating finger food...that’s a pretty clear indicator the goods weren’t blotted or allowed to drain once they were pulled from the fryer. Ugh.

We spy a few tables indulging in the locally-sourced pork chop and tonight’s Asian rib special, both of which are truly Fred Flintstonian in size. But then our entrees arrive and there’s no time for peeking at other people’s food! I adore maque choux, a Cajun preparation of corn that’s hard to find in the Midwest. So when I see it accompanying the scallops and grits, I know what I’m having for dindin. Four ginormous scallops adorn a huge bowl filled with creamy grits, smothered in maque choux—tomatoes, okra, celery, green pepper, and corn. My first scallop is gritty and slightly off-putting, but the rest of the dish and the other scallops are perfect. Southern comfort food at it’s best.

We’re too full for dessert and it’s a weeknight, so we’re sticking with one drink each. (So boring, I know.) The atmosphere is warm and inviting, while the food knocked my socks off. Despite the ho-hum service, we will be back!